We’ve Not Received Any Injunction, Our Strike Continues – GRNMA 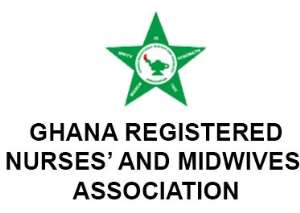 The Ghana Registered Nurses and Midwives Association (GRNMA) says its members will go ahead with their intended strike on Monday, September 21 despite the interim injunction secured by National Labour Commission (NLC) to restrain them.

According to the Association, it is yet to receive any official injunction notice to that effect.

The NLC on Friday, secured an interim injunction to restrain the Ghana Registered Nurses and Midwives Association from going ahead with its intended strike.

The Secretary of the Association, David Twum Tenkorang in a Citi News interview said the association will not back down on its demands.

“As far as the association is concerned, we have not being served so the declaration of the strike continues unabated. If we are served the injunction properly, we will speak to our executives. The decision wasn't taken by the president neither was it taken by the General Secretary, it was taken by the entire Council of Ghana Registered Nurses and Midwives Association. ”

“So we will call them and hold conversations with our allied associations to make a determination. We are prepared to go the full length to demand whatever we are asking for.”

Meanwhile, NLC says the intended strike by the GRNMA will threaten the country's health sector.

According to Executive Secretary of the NLC, Ofosu Asamoah apart from the possibility of contempt of court, if the association goes ahead with its strike, it will be a big blow to the country’s health sector.

The GRNMA had earlier served notice that all public sector nurses, midwives, Physician Assistants (PAs) and Anaesthetists (CRAs) will from Monday, September 21 withdraw their services to demand improved conditions of service.

The association said the government's stance during negotiations fell foul of Act 651 of the Labour Law.

Section 97 of the cited law deals with issues of good faith for stakeholders, which the association appears to have an issue with.

As a result of the impending strike, the association urged the general public “to seek medical attention from other health facilities”.

The decision comes after a series of meetings with the government.

One of the conditions of service negotiation meetings was held on September 3, 2020, and “was not conclusive,” according to the association.

The most recent of the September meetings were held on September 15 and 16.

“The proposal of the employer as reported cannot serve the economic interest of all nurses, midwives PAs and CRAs,” the association indicated.