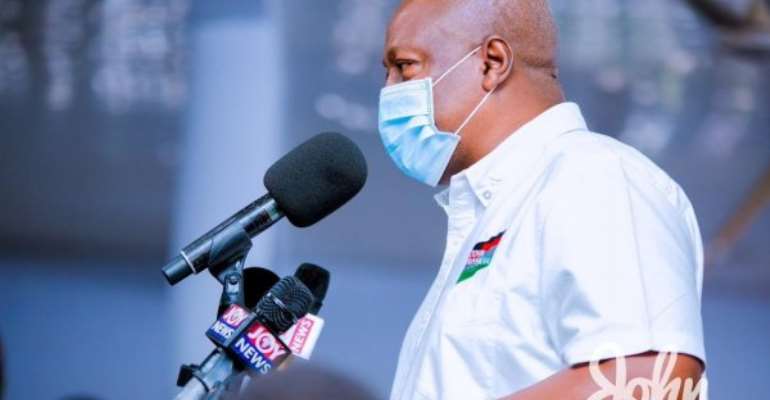 Former President John Dramani Mahama, the Presidential Candidate of the National Democratic Congress (NDC), says promoting agri-business will be a top priority of his next government.

A statement issued by Mr James Agyenim-Boateng, the Spokesman of the NDC Campaign Team said Mr Mahama unveiled his blue print for the agriculture sector at Kintampo as part of his three-day tour of the Bono East Region.

Mr Mahama said it would ensure real transformation of the agriculture sector by increasing the earnings of farmers and creating more jobs.

As part of the agriculture sector transformation plan, Mr Mahama said the name of the Ministry of Food and Agriculture would be changed to the Ministry of Agriculture and Agri-business to reflect the special emphasis on creating more business opportunities for farmers.

He explained that under the plan, the government would set-up agricultural mechanisation centres with modern farming machinery to make the work of farmers easier and more attractive to the youth.

He added that farmers would then be able to access the services of the centres at cheaper rates or on credit and pay after harvesting their crops.

He said the next NDC government would create crop processing zones, where smaller factories would be established across the country to help process farm produce and reduce post-harvest losses.

Mr Mahama said his next government, in line with the 2020 manifesto of the NDC, known as the People's Manifesto, would establish a Cashew Development Board to promote the interest of cashew farmers.

He said his government would also establish cashew processing plants in the Bono and Bono East Regions to process cashew nuts for the export market.

Mr Mahama urged the electorate to vote for him in the December 7 general election for the NDC to implement its manifesto plan which seeks to create a quarter of a million jobs every year for the next four years as well as invest two billion dollars annually over a five-year period to create opportunities for local businesses and stimulate economic growth.

Ejura probe: Ministerial Committee presents its report to In...
57 minutes ago