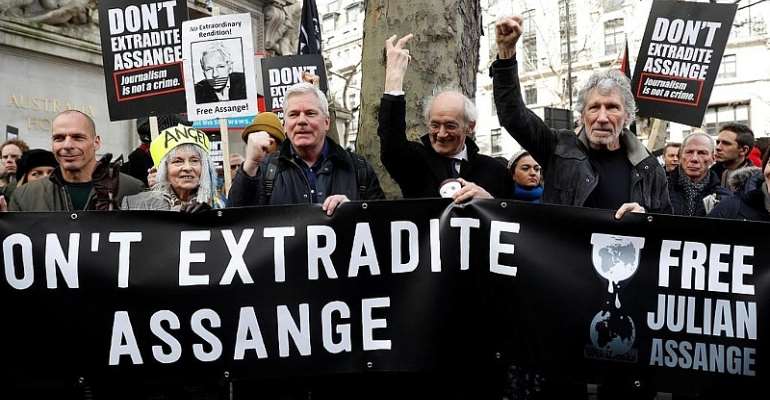 The extradition trial of Julian Assange at the Old Bailey moved into a higher gear today. Testimonies spanned the importance of classified information in war journalism, the teasing offer of a pardon for Assange by US President Donald Trump, torture inflicted by the US Central Intelligence Agency, the chilling effect of indictments under the Extradition Act and the legacy of the Collateral Murder video.

Investigative journalist Nicky Hager did some dusting and sprucing of the image of Assange via testimony given on videolink: not the “difficult, awful” individual discussed in standard media outlets, he asserted, but a figure “devoted” to “trying to make the world a better place in an era when there is declining freedom of information in most of the world.” Hager found Assange “thoughtful, humorous and energetic.”

In his written testimony, Hager speaks to the role of journalism – the sort that matters, in any case – and war. “It is in general impossible to research and write about war to a useful standard without access to sources that the authorities concerned regard as sensitive and out of bounds – and all the more so with the subject of war crimes.” Classified information, notably in war, “is essential to allow journalism to perform its roles of informing the public, enabling democratic decision making and deterring wrongdoing.”

Hager managed to crowbar in a contemporary parallel on the importance of releasing the Collateral Murder, depicting the criminal slayings of civilians and journalists in New Baghdad. The exposure of the incident, and the language used by the helicopter crew (“Look at those dead bastards”) contributed to “world opinion about the misuse of state power” in much the same way the video of George Floyd’s killing by Minneapolis police did to current debate.

The prosecution was in no mood for this more nuanced Assange, sensitive to caution and discretion. For them, he remains a cold, calculating figure of dangerous idiosyncrasies, who endangered the lives of individuals by publishing unredacted documents. Hager had understood that WikiLeaks only released the documents once the cables had already found their way onto platforms such as Cryptome, courtesy of the publication of the password to an unencrypted file in a book by Guardian journalists David Leigh an Luke Harding. “WikiLeaks made strenuous efforts to keep it secret, and it was released everywhere first.”

James Lewis QC for the prosecution suggested a corrective: that 154,000 US cables marked “simply protect” had already been published a week earlier. Hager answered that this account was disputed. In any case, the nine months between initial publication and the public availability of the unredacted material gave US authorities ample time to protect sources and “warn any informants who could’ve been named.” The precautionary measures “taken by Julian Assange at the beginning help explain why there was not wholesale damage from those unredacted documents finding their way out.”

The second instalment of the day’s proceedings brought the Trump administration to the fore, notably for the inescapable implication that this entire show is unmistakably and insolubly political. The defence returned to a statement by Jennifer Robinson, Assange’s ever committed legal advisor, which had already been aired in extradition proceedings held on February 24, 2020. It covered a purported meeting between ex-congressman Dana Rohrabacher and Trump associate Charles Johnson with Assange and Robinson in August 2017 at the Ecuadorean embassy in London. The theme: a potential pardon for Assange, with a distinct, thorny catch.

As Robinson’s statement, discussed by Edward Fitzgerald QC at the Woolwich Crown Court in February recalled, “the proposal put forward by Congressman Rohrabacher was that Mr Assange identify the source of the 2016 election publications in return for some kind of pardon, assurance or agreement which would benefit President Trump politically and prevent US indictment and extradition.”

In Robinson’s testimony, Rohrabacher made his embassy visit with Trump’s executive blessing. Upon his return to Washington, a presidential audience would be granted. The congressman wished “to resolve the ongoing speculation about Russian involvement” in the publication of the Democratic National Committee disclosures by WikiLeaks in 2016. Such speculation was proving “damaging to US-Russian relations, that it was reviving old Cold War politics, and it would be in the best interest of the US if the matter could be resolved.” One way of doing so would be Assange’s yielding of relevant information about the source behind the DNC leaks, something of “interest, value and assistance to the President.”

Assange was not forthcoming, preferring to push Rohrabacher to lobby Trump about the First Amendment implications of any indictment against the publisher. With the duo leaving empty-handed, the suggestion by the defence is credible: the prospects of an indictment, considered unlikely during the Obama administration, had hardened. Prosecutor Lewis was blandly dismissive of the entire episode. “We obviously do not accept the truth of what was said by others.”

The prosecutors had already made efforts to frustrate the insertion of Khaled el-Masri’s account into proceedings, a telling point given his experiences of torture at the hands of the CIA in 2004. There was squabbling on the issue whether he be heard live by video or to have his statement read out in court. “We see no utility whatsoever in having Mr el-Masri in court,” put the prosecution. This prompted an intervention from Assange: “I will not accept you censoring a torture victim’s statement to this court.”

The prosecution relented to a reading of a summary, with the understanding that it did not stipulate that el-Masri had ever been tortured by the US government. This was rich, and unpalatable stuff. El-Masri, a German citizen, had been kidnapped at the Macedonian border, detained and kept incommunicado for 23 days in 2004. It took the European Court of Human Rights in 2012 to confirm the CIA’s handiwork in torturing el-Masri, holding Macedonia responsible for being complicit and not investigating the case. There had been no warrant for his arrest; his transfer to the US authorities amounted to “an extra-judicial transfer of persons from one jurisdiction or State to another, for the purposes of detention and interrogation outside the normal legal system, where there was a real risk of torture of cruel, inhuman or degrading treatment.” At Skopje Airport, el-Masri “was severely beaten by several disguised men dressed in black”, subsequently “stripped and sodomised with an object.”

As el-Masri stated, “I record here my belief that without dedicated and brave exposure of the state secrets in question what happened to me would never have been acknowledged and understood.” His “exposure of what happened was necessary not just for myself but for law and justice worldwide. My story here is not yet concluded.”

His statement also notes the broader, international dimension of collusion, a point reiterated in court by defence attorney Mark Summers QC. Only with the publication of the cables by WikiLeaks, notes el-Masri, “did it become clear what pressures had taken pace beyond Macedonia’s collusion with the US.” This included the ineffectual issuing of warrants for thirteen CIA operatives issued by a German state prosecutor. In February 2007, the German Deputy Security Adviser, Rolf Nikel, was warned by the deputy chief of mission to Germany that “the issuance of international arrest warrants would have a negative impact on our bilateral relationship. He reminded Nikel of the repercussions to US-Italian bilateral relations in the wake of a similar move by Italian authorities last year.”

El-Masri’s treatment, and the importance of the WikiLeaks disclosures in exposing it, have already been noted in the testimony and statement of John Goetz, who worked for Der Spiegel between 2010 and 2011. The published cables supplied “an explanation about why there were so many difficulties during the investigation.” It was “only when reading the diplomatic cables that we saw the role the US government was playing behind the scene.” Impediments continued to be put upon a fair and just resolution of the case, including threats by the US Secretary of State Mike Pompeo to sanction those bringing cases before the International Criminal Court. El-Masri remains imperilled.

Carey Shenkman and the Espionage Act

Carey Shenkman, First Amendment specialist and historian of the Espionage Act of 1917, duly resumed his testimony on the implications of his illuminating, and unsettling overview of the Act’s application. The prosecution, this time steered by Clair Dobbin, continued to rely upon rulings on the Act suggesting that prosecuting journalists was permissible. Challenges about its reach had been made and failed. The jurisprudence on the statute had, over the years, been refined.

Shenkman reminded the prosecution that such cases were marked by the punishment of government sources and insiders, not media representatives. Suggesting that the jurisprudence on the Act had been “refined” was also a point of demurral, given that “national defence information” had been broadened to include anything government deems sensitive. He also took issue with Dobbin’s view that prosecutors that shown considered “restraint” when using the Act. The very fact that an indictment had been issued under its provisions against a journalist, whatever its prospects of success, instilled a “significant chilling effect”, applicable, potentially, to all those reading or retweeting defence information.

The final part of the day’s proceedings was given over to the witness statement of former Reuters Baghdad bureau chief, Dean Yates. His subject of torment: the killing of two of his colleagues, Namir Noor-Eldeen and Saeed Chmagh, among other civilians, by the crew of the Apache helicopter depicted in the video Collateral Murder. Their deaths spurred Yates to identify the chain of events. He submitted a Freedom of Information Act request; it was rejected. He was shown select portions of the video by the US military, an act of wilful omission. From the depths of deep confusion he blamed Namir “thinking that the helicopter fired because he had made himself look suspicious and it just erased from my memory the fact that the order to open fire had already been given.” Assange had sniffed out that the rules of engagement had not been complied with.

Trauma followed. Feelings of failure in not adequately protecting his staff. Crushing shame. Yates opined about the powerful effect of Collateral Murder, the shame it caused the US military, “fully aware that experts believe the shooting of the van was a potential war crime.” Without the role played by Chelsea Manning and Assange, “Namir and Saeed would have remained forgotten statistics in a war that killed countless human beings, possibly hundreds of thousands of civilians.” The act of disclosing the grisly encounter of July 12, 2007 was “100 percent an act of truth-telling, exposing to the world what the war in Iraq in fact was and how the US military behaved and lied.”