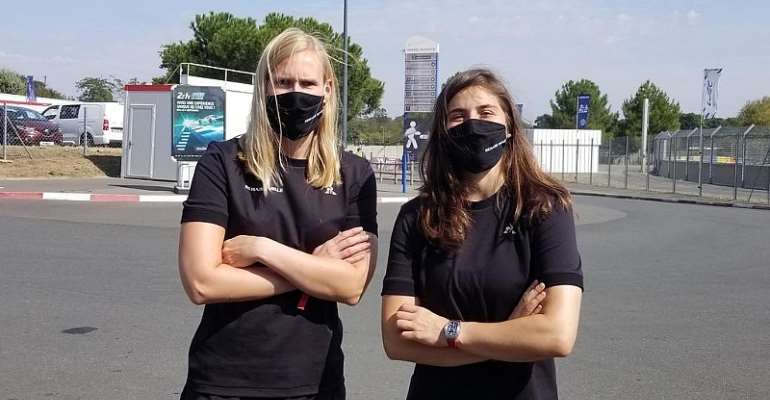 Beitske Visser has ticked off one of the items on her bucket list. The 25-year-old is making her debut at this year's Le Mans 24-hours race as a part of an all-female crew of Richard Mille racing.

“I am very happy I got a chance to race here. I will definitely enjoy it,” Visser remarked before the start of the event on Saturday.

The Dutch driver will be sharing the driving duties until Sunday afternoon in a LMP2 or Le Mans Prototype 2 car with two other rookies Tatiana Calderon and Sophia Floersch.

Among the three, Calderon is the most experienced.
She is the Formula One test driver at Alfa Romeo F1 and has competed in the Super Formula series in Japan, becoming the first woman to achieve this distinction.

Dream
Calderon says racing at Le Mans is like a dream-come-true. “I cannot wait to drive in the legendary race. It's one of the most challenging races."

She added: "One requires extra training to be in the car to do two or three hour stints for 24 hours. At night, you have to adapt to different conditions.

"When you want to sleep, you are in the car, pushing it to its limits. Driving here requires a lot of focus and a lot of endurance training,” the 27-year-old Columbian added.

Both Calderon and Visser have raced at night, an element that plays a crucial role at Le Mans.

Calderon drove a Lamborghini GT3 at the 24-hours Daytona race, Visser gained her experience at Le Castellet 240 in August.

“It takes a while to get used to it; the light, the traffic. At 4am, you feel a bit lonely but it's a great challenge as well,” Calderon said.

Big machine
The LMP2 car they will be driving is a beast of a machine. Powered by a 4.2 litre engine that produces 600 brake horsepower, the car can reach speeds in excess of 340 km/hr. “It's a very fast car with a lot of downforce. A car I enjoy driving,” Visser said.

At such speeds and in such challenging conditions, the risk of an accident is ever present. Does it play on their minds? Visser said that while driving, one should only think about driving.

“The moment you start to think about these risks, it's better to stop. That's because you won't be able to find the limits anymore.”

Visser's attitude is perhaps best exemplified by the return of her teammate Sophia Floersch to competitive racing after suffering a terrifying crash in Macau in 2018.

Return
The 19-year-old, who required spinal surgery after the accident, won this year's Laureus Comeback of the Year award for returning to the same track as a driver a year after the crash.

A combination of their resilience, experience and a competitive car could help the three tyros spring a surprise at this year's competition.

“It's true we are rookies and it's the first time the three of us are driving together in a race. So it's not going to be easy. But we have a very good team behind us. Besides, this is Le Mans where anything is possible. We have the tools to fight to win,” Calderon said.

Richard Mille Racing is one of the two teams at this year's Le Mans 24 hrs that boast an all-female drivers crew. The other team, Iron Dames, will participate in the GTE category.

Calderon, who sits on the women's motorsport commission of the FIA, the world sport's governing body, says times are changing as far as the participation of women in motorsport is concerned.

“Hopefully, we will see more women joining the sport as it's one of the only sports where we can compete on equal terms,” she said.