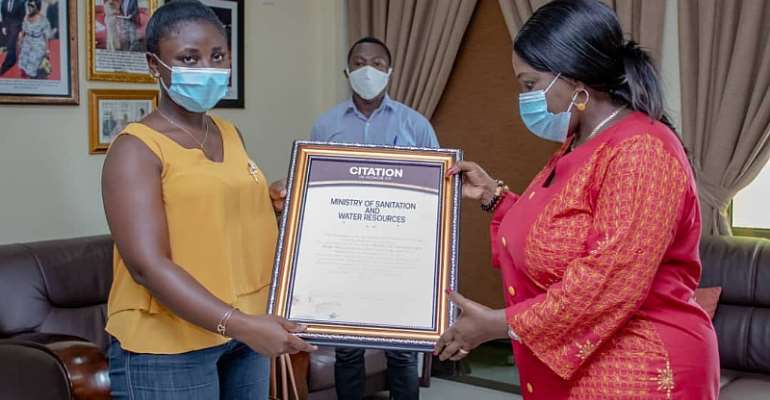 The Minister for Sanitation and Water Resources Hon Cecilia Abena Dapaah has commended the members of the Coalition of Unemployed Graduates of the schools of Hygiene for their patience and tolerance prior to their job placement at the various Districts across the country.

The sector Minister Hon Cecilia Abena Dapaah stated this when she granted audience to a four member delegation of the Coalition of Unemployed Graduates of the schools of Hygiene who paid a courtesy call on her at her office on Friday September 18.

The delegation was at the office to officially thank the sector Minister Hon Cecilia Abena Dapaah for her personal intervention and involvement which has enabled the graduates to secure employment after completing their course at the various schools of Hygiene.

They further appealed to the sector Minister to help resolve any outstanding issues relating to their employment which are still on the table.

Hon Cecilia Abena Dapaah stated that it was her personal joy to see the graduates employed.

She said her Ministry would continue to work with other key stakeholders to ensure any outstanding issues relating to their employment are resolved.

The sector Minister stated that it was a great opportunity for them to be employed by the government and urged them to be law abiding and show commitment to their work at all times.

Hon Cecilia Abena Dapaah added that the issues of the schools of Hygiene are very dear to the heart of President Akufo Addo.

And to this end, the government would continue to provide the needed resources to enhance teaching and learning at the various schools of Hygiene.

She reminded the graduates that they are the future leaders of the country and should be very mindful of whatever they do. " It is a privilege to work for your country and this should be seen in your commitment and dedication to work wherever you find yourself."

She admonished the graduates to always see their glass as half full instead of half empty because there would be a few challenges at their various places which with time will be resolved.

She said the gratitude of the graduates should also be extended to the Ministry of Finance since the clearance for their employment was issued by them with her outfit only facilitated the whole process.

She thanked the graduates for the courtesy call and asked them to be good ambassadors.

Miss Alice Frimpomah, who spoke on behalf of the delegation thanked the sector Minister for the honour done them by receiving them and for the motherly advice.

She promised they would do their best wherever they find themselves.

The delegation later presented citations to the sector Minister.