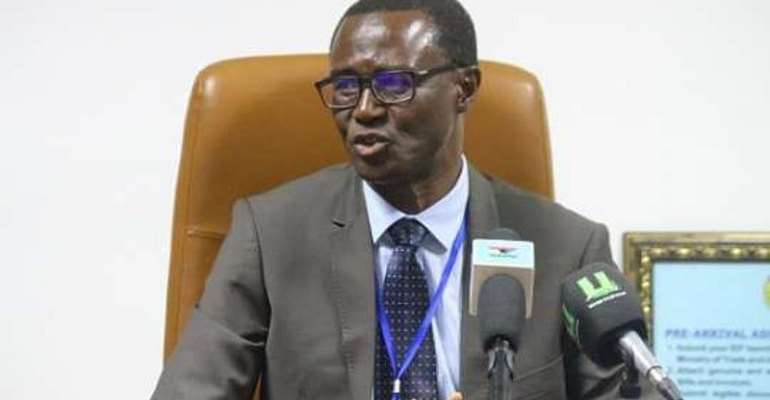 Rev. Ammishaddai Owusu-Amoah has the Authority is even fired up to meet the 'challenged' target of GHC55million at the end of the year 2020.

“As an Authority, we cannot continue to do business as usual, thus, we have put in place a number of measures to ensure that we attain our 2020 revenue target of GHC 42.7 billion. We are determined as an organization to collectively put our shoulders to the wheel as we roll out some of the policies we will be discussing this evening to achieve our ‘challenge’ target of GHC 55 million in these ‘not normal times”.

He said this at a media engagement at the Coconut Groove Hotel in Accra On September 11.

Mr Owusu-Amoah noted that the authority is working together with all stakeholders as partners such as the media with a common objective of ensuring the needed revenue is collected for the development of the country.

To ensure an improved revenue mobilization in the last half of 2020, he said the sector has put in place technology backed measures which focuses on People.

Rev. Ammishaddai Owusu-Amoah added that a number of initiatives have been rolled out whiles others at various stages of development.

He mentioned the introduction of the Integrated Customs Management System (ICUMS) at the ports with the objective of ensuring more efficient management and collection of customs duties and taxes.

He added that the modules in the second phase of the Integrated Tax Application and Processing System (ITaPS), have been deployed on the Ghana.gov platform making it possible for taxpayers to file some returns and make payments online. "Now, over fifteen banks have been signed on to receive payment of taxes via the Ghana.gov platform and we are confident that by the end of the year more banks will join us. We will therefore be on our way to making payment of taxes more convenient for our taxpayers."

In addition to making payment of Vehicle Income Tax more convenient, Mr Owusu-Amoah indicated that the Authority is piloting the payment of tax via a USSD code *222#.

He said the figure which increased significantly between May and June 2020 is as a result of the requirement of a TIN to register to access Government’s COVID19 stimulus package from the National Board for Small Scale Industries (NBSSI).

Mr Owusu-Amoah added that the Authority together with the Ministry of Finance in June 2020 inaugurated the Tax Audit and Quality Assurance Department which was set up to ensure improved quality of audits and revenue assurance.

According to him, the Department will manage the centralized audit planning process, serve as the audit centre of excellence, monitor and ensure quality audit across the operational Divisions and investigate significant tax gaps including cases of suspected tax evasion, avoidance and fraud. "In this regard, we encourage you to report cases of tax fraud and tax evasion to us for investigation and rewards."

On the transformation agenda, Mr Owusu-Amoah stressed that the Domestic Tax Revenue Division (DTRD) commenced the first phase of a nationwide restructuring exercise in Accra and Kumasi in August.

He indicated that the aim of this exercise was to implement some of the feedback they have received from taxpayers on improving service delivery to them.

"Now taxpayers will be able to file returns at the nearest Taxpayer Service Centre (TSCs) irrespective of turnover. This will create convenience for taxpayers and free them to use their time for other productive ventures. The aim is to establish offices not on the basis of turnovers as it was previously but rather with respect to jurisdiction," he intimated.

Ejura probe: Ministerial Committee presents its report to In...
58 minutes ago