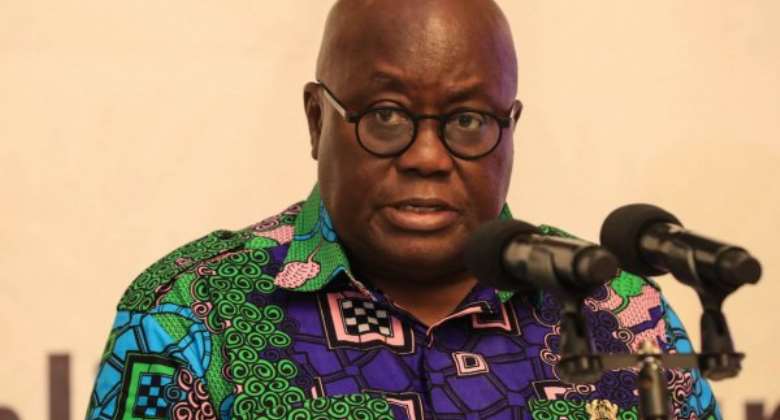 President Akufo-Addo on Friday received the letters of credence of five new envoys accredited by their respective countries to begin their duty tour of Ghana.

At separate ceremonies at the Jubilee House, Accra, the new envoys relayed the best wishes of their respective governments to President Akufo-Addo for his election as the Chairman of ECOWAS and expressed confidence in him to provide the right leadership to surmount the region's challenges.

They also commended Ghana for leading the integration agenda on the continent and for hosting the secretariat of the African Continental Free Trade Area (AfCFTA).

They expressed their commitments to further deepen the ties of friendship between their countries and to seek new opportunities for cooperation for the mutual benefit of thier nations and Ghana.

Sudanese Envoy Mohamed Abdelrahman Yasin Mohamed who first presented his credentials, said he looked forward to further strengthen the cordial and constructive relations that exist between the two countries.

“I promise to take this responsibility with all due seriousness and dedication, and to exert possible effort to discharge it”

He told the President that Sudan's Transitional Sovereign Council and government was keen on ending the war, building sustainable peace among others, to advance the socio-economic fortunes of that country.

Ivorian ambassador designate, Moriko, relayed the best wishes of Cote d'Ivoire's leader Alassanne Ouatarra to President Akufo-Addo on his recent election as the chairperson of the ECOWAS.

He noted the cordial relations that has existed between the two countries over the years and the forming of strategic partnerships that had mutually benefited both countries.

Mr Moriko mentioned one such joints efforts between Ghana and Cote d'ivoire, the Strategic Partnership Agreement (SPA), which to him, would consolidate the foundation of an ambitious cooperation between the two countries.

The agreement which was signed between the two countries in 2017, set up a strategic co-operation framework, that covers the areas of Defence and Security; Cocoa and cashew economy and other strategic crops; Maritime cooperation; Mining, energy and environment; Transport; and Economic policies.

Moriko pledged to further strengthen ties between the two countries at the political and economic fronts.

When he took his turn, the Austrialian envoy, Mr Andrews said he was optimistic that the long-standing relations and history of partnership between his country and Ghana would be strengthened further.

He said both nations shared the same important values of democracy, freedom equal opportunity and optimism for the future.

The envoy was particularly impressed with Ghana's management of the COVID-19 pandemic, saying, “Here in Ghana, the government responded quickly and, like in Australia, has consistently put people, safety and science first.”

Mr Andrews lauded Ghana's leadership on economics, free trade and the hosting of the Secretariat of African Continental Free Trade Area and for its principle of self-determination through the 'Ghana Beyond Aid' vision.

“I particularly admire the President's Ghana Beyond Aid approach. And it is terrific to see Ghana as the host of the African Free Trade Agreement. I know Ghana is setting an example of how we can all work together to achieve the United Nations Sustainable Development Goals," he said.

Mr Fury, the Czech ambassador recounted the diplomatic ties between the two countries, which dated back to 1959 during the time of Ghana's first President, Dr Kwame Nkrumah, adding, “We would like to continue in this tradition of support and cooperation. “

He referred to the number of high level political and business exchanges that took place between both nations last year, all in the bid to further strengthen ties, and pledged his country's commitment to ongoing cooperation in the field of development.

Mr Fury said his country welcomed the industrialisation vision of Ghana and the Ghana Beyond Aid agenda, saying that Czech companies could make significant contribution in that direction.

Additionally, he was optimistic that cooperation which were mostly focused in areas of health care, infrastructure agriculture and security would be advanced to include other opportunities in power generation and distribution, Agro -processing and water and sanitation.

The Czech envoy placed emphasis in the fact that the quality of relations between the two countries would be determined to a great extent by the intensity of their economic cooperation.

“One of our goals is therefore to negotiate the Agreement on Protection of Investments and sign the Economic Cooperation Agreement with Ghana.

“We seek to fully exploit all opportunities of multilateral diplomacy; hence we will not hesitate to access funds from different sources including the European Development Fund to enhance the development cooperation between Ghana and the Czech Republic “

The Italian envoy, Madam Daniela d'Orlandi extolled Ghana's democratic credentials and for her commitment to the implementation of the United Nation's Sustainable Development Goals.

She said the relations between Italy and Ghana remained excellent and had grown over the years leading to high level exchanges, with a common commitment to combat terrorism, piracy innthe Gulf of Guinea and for the stabilisation of the Sahealian belt.

She pledged to do her best to fortify and promote investment, credit opportunities and trade cooperation between Itali and Ghana.

President Akufo-Addo, on his part, congratulated the new envoys on their appointment and welcomed them to Ghana.

He expressed his administration's commitment to deepen the relations between Ghana and their respective countries.

The President said Ghana's commitment to work together within ECOWAS, the AU and within the world body was one of the important basis of the country's foreign policy.

He described the African Continental Free Area (AfCFTA) agreement as one of the most important decisions of the African Union, and said Ghana was committed to the integration agenda of the continent and would pull all stops to ensure its success.

“If, indeed, it works, it would be a major platform to the development and empowerment of the continent, he said”.

He wished the envoys a successful duty tour of Ghana.