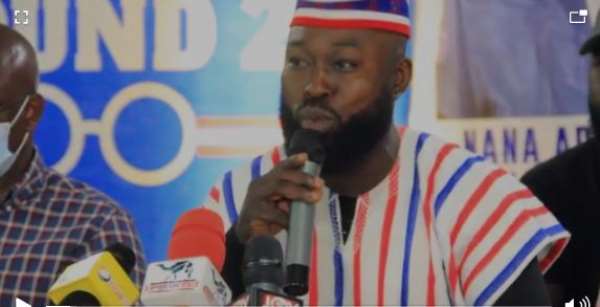 A known critic of the Akufo-Addo-led government and an activist of the National Democratic Congress (NDC) in the Asawase Constituency, Murtala Mohammed, has defected to the governing New Patriotic Party (NPP).

He pledged to help the party unseat the current NDC Member of Parliament (MP) for the area, Alhaji Mohammed Mubarak Muntaka after the NPP declared its readiness to capture the Asawase seat in the December polls.

Popularly called Prince Akuta, his vibrancy on social media enables him to mobilize the youth to fight for development in the area.

His decision to join the NPP, a party he has always criticized came as a surprise to many including NPP members in the constituency.

He played a pivotal role in securing victory for Mubarak Muntaka in the 2016 general elections.

Prince Akuta explained that his reasons for leaving the NDC to join the NPP are motivated by the massive development Zongo communities have witnessed under the leadership of the President Akufo-Addo and Vice President Dr Mahamudu Bawumia.

He also cited the payment of Arabic tutors and the smooth arrangement of Hajj pilgrimage under the NPP government as other reasons for joining the ruling party.

He pledged to use his influence to help the NPP secure the Asawase parliamentary seat in the December polls.

Parliamentary candidate for the NPP in the Asawase constituency, Alhaji Alidu Seidu said the party has welcomed Prince Akuta wholeheartedly into its fold.

Alhaji Seidu called on party members to embrace the new entrant since the NPP is a party that does not discriminate and a party for everyone.

Prior to the 2016 elections, a deputy communications officer for the NDC Zongo Caucus, Awal Mohammed also joined the NPP.

Awal is the current Public Relations Officer for the Youth Employment Authority (YEA).