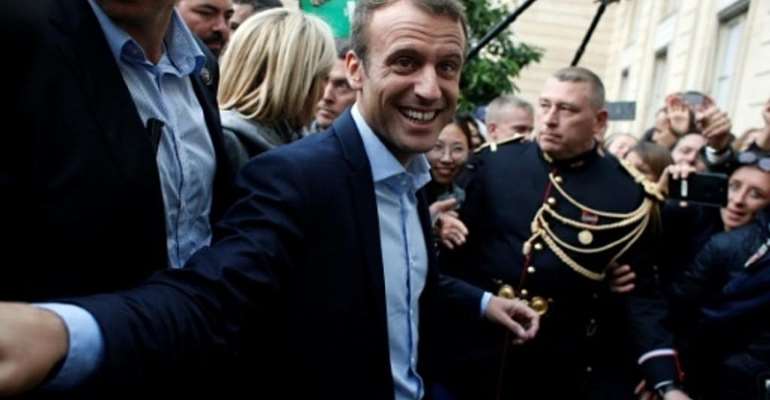 French President Emmanuel Macron has reiterated the government's desire to protect heritage sites in France, as he spent part of Friday in the town of Condom, in the Gers region visiting an 18th century mansion.

The visit comes ahead of the European Heritage Days, taking place across the continent over the weekend. However, some events have been canceled or modified due to the rise in Covid-19 cases.The theme for this year's 37th edition of European Heritage Days is “Heritage and Education – life-long learning”.

Created in 1984 by the French Ministry of Culture, European Heritage Days take place annually on the third week of September. Every year over 17 000 sites participate.

A number of events are organized, including visits to buildings not normally open to the public, such as the Elysée Palace and the Senate in Paris, or private domains such as castles, villas and factories.

Ahead of his visit to the Polignac manor or 'hotel particulier', in Condom (Gers), a building constructed in the neo-classical style dating back to the end of the 18th century, Macron reiterated his wish to “save and preserve heritage in all our regions.”

The president was accompanied by Culture minister Roselyne Bachelot, the head of the Heritage Foundation Guillaume Poitrinal, the initiator of the National heritage lottery Stéphane Bern and the CEO of the National Lottery company (Française des Jeux), Stéphane Pallez.

Macron met with local primary school students and teachers as well as workers and volunteers involved in the restoration campaign.

The castle is one of 18 monuments drawn from a national “heritage lottery” in 2018 which means it benefits from funding for renovation.

Financial boost for Culture
The cultural sector has born the brunt of the Covid-19 closures and economic difficulties, something the state has said it wishes to rectify in the coming months.

Macron's €100 billion recently announced plan to reboost the French economy includes €2 billion for culture, €614 million euros of which will be dedicated to heritage sites and museums.

€334 million have been earmarked to support large museums such as Le Louvre, the Château de Versailles and Musée d'Orsay.

€280 million is to be put towards regional heritage sites, and to develop artisanal trades and know-how.

Many events in this year's European Heritage Days have had to be cancelled due to the rise in the number of Covid-19 cases, such as in large cities of Lille, Marseille and Bordeaux.

In Paris, many events have been maintained, but with reduced numbers of visitors to respect social distancing, or virtual visits, such as the one organised by the Culture Ministry and the team involved in restoring the Notre-Dame cathedral after a fire swept through in 2019.

Among the sites participating in the European Heritage Days for the first time on the 19 and 20 September, is the Atelier Rozsda at the Bateau Lavoir in Montmartre, with a guided tour called from "Picasso to Rozsda".

The Franco-Hungarian surrealist painter Endre Rozsda set up his workshop in this mythical place which had from the early 1900s become a hub for painters such as Picasso.

You can find a peak preview in this Encore report, broadcast on France 24 television in English.

It seems particularly appropriate this year that the theme is focused on education, and learning, a sector which was disrupted by the Covid-19 lockdown which forced schools to close and teachers to use distance learning tools, not necessarily accessible to all students. This has been the case again for a number of schools and classes at the beginning of September.

“At a time of real concern about our changing environment there is so much that we can take from our forebears and adapt to our current needs,” says the European Heritage Days website.

“Heritage is not just for special days. It has the potential to offer creative solutions to problems and help us to re-imagine how we can utilise our past to provide new ideas for a different tomorrow.”