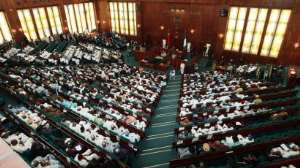 The new controversial Companies and Allied Matters Act, also known as CAMA Law, assented to recently by President Buhari, had shown that the Illuminati have hijacked Nigeria's National Assembly, NASS, and our parliament and government has become a breeding ground for chaotic dispositions.

This is the National Assembly that reportedly collected $10 million dollars bribe from Bill Gates to pass an obnoxious bill which sets to force Nigerians to be vaccinated by a yet to be produced vaccine when other countries are trying hard to avoid a compulsory vaccination.

When the leader of conglomerates of opposition politicians, Congress of United Political Parties CUPP, Ikenga Ugochinyere, raised alarm concerning the bribe $10 million dollar bribe, he was hounded, arrested and intimidated with the police, to provide evidence of where the bribe took place as if bribes are given on top of rooftops or the parade grounds of Eagle Square.

I have written several pieces on how the Chinese invented a virus and the Illuminati wants to use the occasion to drive a vaccine aimed at instituting a 'One World Government'. I wrote most of these piece in March and April, and many doubted and called me conspiracy theorist, today nobody is in doubt about the deliberate origin of Corona Virus, nor the failed attempt by the vaccinists to turn the world into a huge field of digitally certified zombies. Thanks to Dr Stella Emmanuel in the United States who proved that the entire Covid-19 scare is a big scam.

Back home, The CAMA Law has sections which seems to oust the authority of religious bodies , charities, foundations , mosques and churches to internally resolve their issues, and vested it on the Corporate Affairs Commission and the courts. In a nation where the courts have become a bureau de change and the government agencies dance to the tunes of those in power, the churches have smelt rat and cried foul over the act

From Bishop Oyedepo, Apostle Suleman, Archbishop Kaigama, Cardinal Onaiyekan, to the pastor of the church near my house, they have all vented vituperation on Buhari and his Fulani stock for the law.

I wrote a piece on May 5 titled, Forced Covid-19 Vaccination: Illuminati Hijacks NASS' I argued that;

"The forced vaccination bill which scaled speedily through second reading last week at the National Assembly is enough evidence that the Illuminati have hijacked the Nigeria parliament and the Covid 19 Disease Control Team.

"The bill named Control of Infectious Diseases Bill 2020 grants more administrative powers for forceful vaccinations to limitations on Freedom of association to the DG of Nigerian Centre for Disease Control NCDC.

"Nigerians have woken from sleep but the truth is that Illuminati, like Boko Haram, had penetrated the highest echelons of governance and are set to test what failed in United State and Europe on some ‘Nigerian monkeys whose penchant for corrupt bananas is fantastic"

Continued further in the piece by asserting that ;

"I want to say to Nigerians, Illuminati Here they Come!

"What was rejected in Europe and America is about to be tested in Nigeria.

"Illuminati Here they Come! – all the prosperity preachers and jet preachers will soon be asked to surrender their members for vaccination or be thrown out of spiritual business.

"Illuminati Here they Come!- all the years corruption, ineptitude which led to the wastage of successive years of oil windfalls , especially when oil sold for between $100-$140 dollars will haunt us -No Electricity, No Healthcare, No Social Security

I Wrote another titled 'Governor Abiodun Hits Bishop Oyedepo, Locks Down Saturdays and Sundays' I said that;

"Covid-19 has relegated the flamboyant church of Jesus Christ to spineless beggars who must operate at the behest of filthy government officials while conflicting incompetent directives from the WHO is ruining the world. This is my position and I have not seen any superior argument to change it. China, India and Japan are not relying on any WHO guidelines to rid their country of Covid-19, and these counties are of Buddhists, Hinduist, Shintoist and atheist religious leanings while the sons of Abraham; Christians, Muslims and Judaists are pandering to the whims and caprices of a discredited WHO.

"Things have fallen apart! The church is in terrible mess! In the coming weeks, these corrupt officials will be ordering them about the manner village headmasters’ orders pupils about. This evil seed of ceding influence to corrupt and confused government officials the church is about to reap. The early church defied Emperor Nero’s orders and continued worship, despite persecutions. The early church had earlier defied the Sanhedrin, the Chief Priests, the Pharisees and Sadducees and continued until they become strong. Therefore, these lame excuses that ‘we should obey government’ are products of monumental bootlicking and spiritual senselessness."

A follow up titled 'Covid-19; Gates of Hell Swallows Lagos Churches' I argued that

“The government is confused; the church is begging confused people for a solution. Tufiakwa! Why then are they trying to open up the economy if their initial measures were correct? Nonsense! The church should use the spiritual resources at their disposal, if they have not mortgaged it to marine spirits, to force these unbelievers, drunkards and looting addicts to open places of worship and let the dehumanized Nigerians ask their Maker for Solutions. They should act fast before Hollywood, Nollywood, Champions League, Music Shows, Movie Premieres and Owambe takes the position of God and the church”.

Our religious leaders underestimated the influence of the Illuminati, and while they became errand boys to Covid-19 scammers, closing churches and claiming new found obedience, the Illuminati moles in government pressurized the President to sign a bill he had rejected twice. CAMA in its entirety is a good act which helps remove the cumbersomeness associated with business registrations and operations in Nigeria. It seeks to bring in more transparency and ease in business practices according to best practices worldwide. However, those who smuggled the contentious sections, knew they are sparking controversy. Those who smuggled the contentious sections into a good law are agents of the Illuminati and their plans are already working. Illuminati Government officials are as mischievous as Boko Haram Government officials who suffocated the 'Transformation Agenda' of former President Goodluck Jonathan, and caused him to be rejected by the Muslim north and western world.

They have hijacked critical sectors of the Nigerian political space, and creating tensions capable of a coup, religious conflict or mass revolution aimed at bloody conflict, and they will bring a solution and everyone will be grateful. The religious leaders of the Christian fold are already dancing to the tunes. Everybody is blaming Buhari, Fulani, Hausa, Muslims for the CAMA Law. Soon the Muslims will spit fire, sponsor terrorism on churches and a much awaited religious war will en sue.

CAMA Act is not about Buhari, Fulani, Islamization and all that balderdash, it is about a government Hijacked by Illuminati.

1.N2 Trillion naira Covid-19 palliative and stimulus is 'food for the boys' , a scam meant to unleash more poverty on Nigerians. Where are the N2 Trillion economic stimulus, who are the beneficiaries

2. A most unfortunate fuel and electricity hike in the midst of national poverty, is meant to spread discontent and mass revolt.

3. Obsession with unscrupulous Chinese loans is another attempt to enslave the 'Gant of Africa' to the Chinese

Illuminatic officials are everywhere. They have invited me severally to join them, and I know what IAM talking about. I have friends who belong there and it is frightening what they still have in the offing for Africa, after God frustrated their Covid-19 plans. Nigeria is the new testing ground.

Church leaders are blaming the wrong person for the bill. It is not Buhari's bill. Those Illuminati members in NASS who sponsored the bill and enabled it pass through all levels, including Committee levels, are members of Winners Chapel, Redeemed Christian Church of God, Mountain of Fire, Catholic and Anglican Churches. They include members of Izalla Movement, Shiites, Sunnis. They pay tithes and Zakkat in their churches and mosques but their allegiance is to the Illuminati ethnos. They have accomplices in WHO, US, UK and many congresses of the western world.

The church have woken up late Let them wait till the last week of November, and they will be dealt a major blow that will last till January-then they will know that the 'Skulls and Bones Society' meant business.

President Buhari is not responsible for CAMA Law, the Fulanis are not part of it, neither are Muslim Ulamas nor the Supreme Council for Islamic Affairs NSCIA as being alleged. Illuminati growing influence in Nigeria is responsible for it.

My consolations that Illuminati is not God. God frustrated their plan to cause millions to die in Africa. In one of my piece titled in the peak of national lockdown in May, titled 'Shut Up: Covid-19 Will not Swallow Nigeria, Africa' I said that

"Covid-19 will not swallow Nigeria according to the visions and revelations I saw on the high mountains and Bill Gates, NCDC, WHO and Covid-19 Task force should shut up!

"The vision that I saw was in four phases;

Phase1-Seen in February 2020- Flood of evil ravaging the world, penetrating into NAfrica and Nigeria and I had to climb higher to avoid the flood.

Illuminati government officials have hijacked NASS, and smuggled CAMA Law into Nigeria, let the church direct their tantrums correctly, and stop firing in the wrong direction, before an unexpected holocaust is unleashed on the citizenry