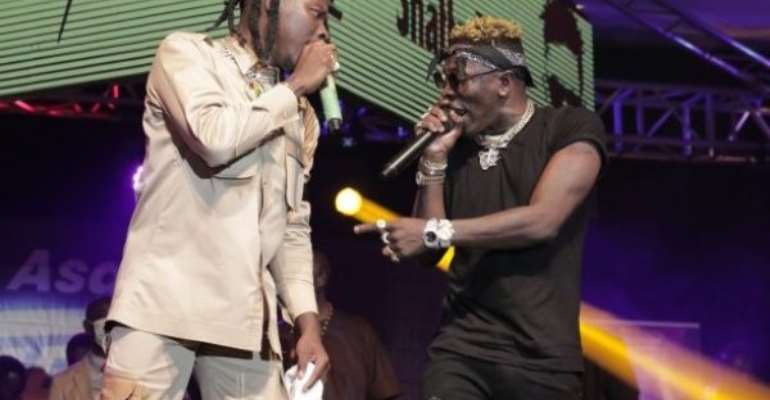 Mrs. Naomi Nelson-Barnes Head of Communications, Marketing, Events, and Promotions of Asaase Radio has said no winner was declared after the Asaase Sound Clash that took place last Saturday between two of Ghana's biggest Dancehall acts on the continent, Stonebwoy, and Shatta Wale.

News making rounds in the media circles suggest that Shatta Wale has been adjudged winner of the Sound Clash and has received the prize.

But Mrs Nelson-Barnesi has said that the prize given out was for the winner of the competition, who sent in the highest number of texts in the pre-event on-air promotion, and that the results have been thoroughly vetted and authenticated by the National Lottery Authority.

“Asaase radio has absolutely not declared anybody the winner of the Sound Clash event, and we are not going to do that. Indeed the only winner here is Ghana Music and the pure artistic genius displayed by the two artistes.

“Today, we are here to celebrate Mr. Patrick Mensah Nartey who has won for himself a brand new car. We congratulate him and wish him the very best," she told Ghana News Agency at the handing over ceremony.

She added, “We have left it to the general public to decide for themselves who they think is the King of Dancehall,'' she said.

She added that the main motive of the Asaase Sound Clash was to help create awareness for the novel Coronavirus and they were excited to have these two artistes come on board to support the course.

Meanwhile, the maiden Asaase Sound Clash witnessed some thrilling performances from the two Dancehall artistes with a vibrant crowd in attendance.

[Video] I joined #FixTheCountry demo because my Church membe...
18 minutes ago