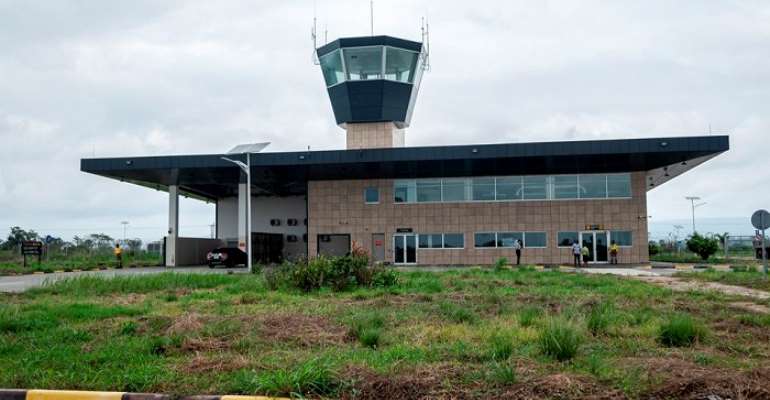 Agbogbomefia of the Asogli State, Togbe Afede IV has urged Ghanaians particularly Voltarians to patronize air travels from the Ho Aerodrome to justify the viability of the air transport business in the region.

The Chief who is also a founder and co-chair of Africa World Airlines (AWA) made the call when an 11-member team from the Airline paid a courtesy call on him in Ho, the Volta Regional capital.

The team had visited the area to conduct a familiarisation tour of the Ho Aerodrome.

There have been several concerns regarding the viability of the Ho Aerodrome which was completed in 2018 at a reported cost of about $25 million.

The Aviation Minister, Joseph Kofi Adda speaking at the Public Accounts Committee siting recently, had also indicated that local airline companies were refusing to operate the Ho route; as engagements with some of them had yielded no positive response.

He also indicated that “given that we don't have our own airline that we can by policy direct that they should be going there, it's so difficult for you to negotiate with the commercial airlines.”

Mr. Adda lamented that “the sad bit of it is that my own good friend who is the overlord of Asogli is the shareholder of Africa World and we've talked with him to try and consider the possibility of going there. The same thing with passion air, my good friend Edward Annan to see how as a shareholder he can also consider the airline going there. They have their own reasons; they look purely for commercial. So, it's it a difficult thing.”

However, speaking in Ho last Thursday September 17, 2020, Togbe Afede stressed that Africa World Airlines which he has some interest in, is willing and able to fly the route pending approval from the government.

His comments were corroborated by Captain Kwesi Oteng, the Chief Safety Officer of AWA who spoke to the media after the inspection of the aerodrome.

He said AWA is impressed and satisfied with the state of the Ho aerodrome; adding that the delay in commencing operations was due to a communication gap as AWA had not been officially informed.

“The normal procedure is that the Aviation Authority notifies local carriers about the readiness of the facility, but apparently that has not been done, hence our visit here this morning to, as it were, do a feasibility study in order to start flying the route as soon as is possible,” Capt. Oteng said.

Meanwhile, the security in charge of the Ho airport, Assistant Aviation Security Supt. II Lucy Adzorxornu, told the media that the aerodrome has already been receiving aircraft; an indication that commercial flights could also commence operations.

Captain Evaristus Cincin Dagbe of the Ghana Aviation Authority also added that “In situations where people need urgent medical attention, we fly them over. We fly some to Korle Bu in Accra and other hospitals. I have personally flown patients. When this airport is operational, it will open up the Region”.

The aerodrome project, which was scheduled for completion in September 2016 was completed in 2018 with a 1,900 metres runway, a traffic control tower, 1,150 capacity passenger waiting area, an ultramodern airbus terminal, offices and an automatic fire detection system among others.