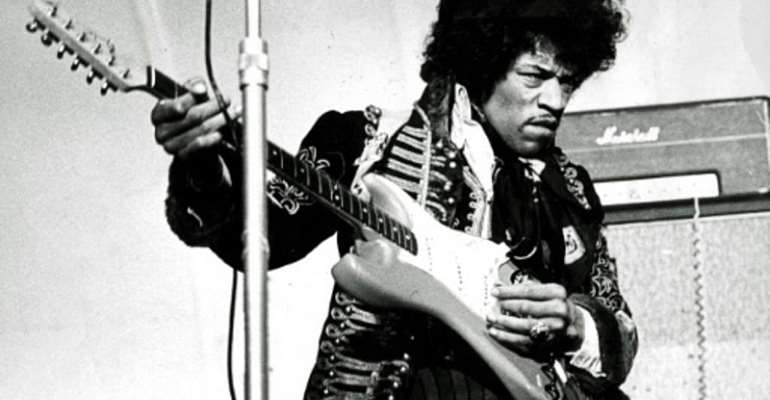 Guitar legend Jimi Hendrix died 50 years ago, aged just 27. In just four years he changed the face of rock music forever. Born in NY, he rose to fame in London, but his first concerts with the Jimmy Hendrix Experience were here in France, thanks to teen rock idol Johnny Hallyday.

The Jimi Hendrix Experience gave their first performance on 13 October 1966.

It wasn't in NY or London but in the Normandy town of Evreux, better known for its dairy cattle and cider.

Hendrix performed to a crowd of around 1,000 at the Novelty cinema, opening for teen idol Johnny Hallyday, France's Elvis.

Alain Lambert, a former journalist with a local paper, 19 at the time, remembered being bowled over.

“We saw a big black guy with afro hair come on stage with a white Fender Stratocaster. The first thing he did was to push the potentiometer button right down. Then he turned to the audience and just took off," Lambert told Paris-Normandie.

“He played the guitar behind his head, with his teeth. He did the screeching acoustic feedback, made the notes linger. We'd never seen anything like it.”

In this INA video, recorded 11 May 1967 at Issy-les-Moulineaux theatre, the Jimi Hendrix Experience performs Hey Joe. We see Hendrix playing guitar with his teeth.

But Hendrix's apparel, the flights of fancy and contortionism on stage wasn't to everyone's taste.

In his book “Stone Free” American music journalist Jas Obrecht recounts how local paper Eure Éclair described Hendrix as: “a singer-guitarist with bushy hair, an unpleasant cocktail of James Brown and Chuck Berry, who did a 15-minute contortionist act on stage and played the guitar with his teeth”.

30 years later Evreux town council put up a plaque to commemorate the event.

The guy with the “guitar graft”

So how come the left-handed genius ended up playing at the Novelty cinema in deepest Normandy?

It's all down to the late rock star Johnny Hallyday.

In the mid-60s Hendrix was struggling in New York. His manager Chas Chandler, original bass player with The Animals, pushed him to go to Swinging London where he thought audiences might be more receptive to the black guitarist's talents.

In an interview with the Journal du Dimanche in 2012 Johnny related how on 29 September 1966 while eating out at a club in London he was hit by “a monstrous guitar sound like nothing [he'd] heard before”.

He got up, went over to the concert area, "and there I see a young man literally eating his guitar.

“It was amazing […] it seemed like the guitar had been grafted to his body,” he recalled.  “After the set, Jimi came to join us, we got on well and I took him on my French tour.”

How Olympia cemented the link to France

Hallyday's French tour was due to begin a couple of weeks later, but Hendrix didn't yet have a band.

“That's how the band came to be formed quickly, in extremis,” said Manou, “with Mick Mitchell on drums and Noel Redding on bass.”

They kicked off in Evreux on 13 October, then played Nancy, Villerupt and finished with the grand finale at L'Olympia on the 18th.

L'Olympia was Europe's biggest venue at the time. Manou insists the Olympia concert left a mark on Hendrix and “cemented his link” to France.

“When you begin your first concerts in France, it leaves an impression. He always said he was more freaked out playing L'Olympia than the Apollo in Harlem because it was so legendary. And Paris was where the biggest names [like Hendrix's hero Bob Dylan] had already performed.”

By the time Hendrix returned to perform at L'Olympia in 1967, he wasn't playing second fiddle, he was a star in his own right. His popularity had also spread thanks to Johnny who did a cover version of Hey Joe.

“There's a recording at L'Olympia in 1967 and we hear him say in French: “je vous aime beaucoup” Manou said.

Beethoven would be listening to Hendrix

During his short life time Hendrix released just three studio albums and a live. Since his death his beneficiaries have released around 40 records.

“He was a sort of UFO because he produced sounds we'd never heard before, just with a few effect pedals,” said Manou. “Nowadays all these sounds can be reproduced using computers, but there was none of that at the time.

“It was just the hands of a hero, and a place.”
For Claude Barthelemey, former director of the Paris Jazz Orchestra, Hendrix was also an exceptional composer.

“His compositions were very structured,” he told RFI. “I'm sure that if Beethoven were here, he'd be listening to Hendrix.”

Hendrix gave a stunning performance at Paris's New Morning on 29 January, 1968. It was released on the posthumous album “Live in Paris & Ottawa 1968”. Essentially listening.