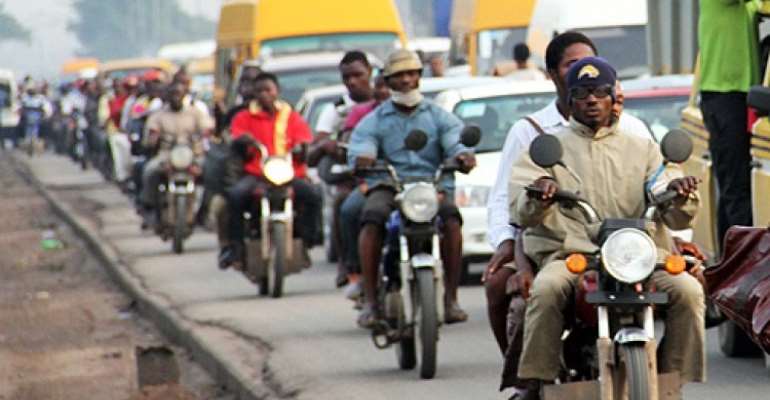 The debate, in the mainstream media, by the two major political parties and other stakeholders on the legalization of Okada should not settle on only issues about livelihoods. Currently, the reasons for the main opposition party to legalise Okada as indicated in its manifesto, are based on giving livelihoods. Yet the other aspects of the endeavour are frightening.

The factors that affect public policymaking are not only those that concern employment and giving of livelihoods, they must be forward-looking in developing the people in the country and systems that affect development. In such a situation, there should be an intensive evaluation of the possible threats and potentials of such a policy without political inclinations.

The effect of the use of Okada on the national economy is little: the indirect effect of the users buying fuel may not outweigh the negative effects the business may pose to the health of the economy and the people especially. Okada may not have a special place in a promising industrial economy. Many countries are planning to advance their transport infrastructures. The development of railway networks to connect cities will help workers beat traffic in these cities.

The extensive use of private cars and other vehicles is the main cause of traffic in cities. But are there traffic congestions in rural areas. No. The main problem of the rural folks is poor road network. This condition is compelling people in those areas to use Okada as a means of transport. There are still villages in Ghana where feeder roads are not constructed to link the villages to nearby towns to access healthcare and other services.

In solving the problems of people in such areas, the solution is not to encourage them to use Okada. The solution lies in providing motorable roads that link them to other towns. For instance, from Kamampa to Abease in the Pru West District, there is no neatly-constructed feeder road. The use of Okada by people in this area will worsen their plight as the road is not motorable.

Even if the legalization of Okada is targeted at people living in rural areas, it is not suitable for building cities. The state can decide to implement such a policy in rural areas to solve their transport challenges. Cities must be planned and developed well with quality transport systems. Governments have not made it their concern to solve the traffic congestion problems in cities. Okada may worsen the traffic congestion situation in cities as it is likely to attract more young men to undertake such a job.

The debate must not only center on the jobs it can create or the accidents it could possibly bring. Every means of transport has some sort of risk of accidents associated with them. Legalising Okada may not make it safer than before. The cause of the accidents related to Okada may be due to the nature of it than how it is practised. The only possible solution available is the use of insurance. Will the Okada riders be able pay insurance premiums for themselves and the passengers?

If Okada has come to stay as many political actors suggest, will it thrive in an industrial economy with advanced technology in the transport sector with neatly constructed road networks in the country? The thrust of the policy to legalise Okada can be identified in job creation, by giving livelihoods to people, and the lack of willingness of political parties to create jobs as well as develop proper means of transport.

Currently, it is reported that about 800,000 people use Okada illegally. If these numbers can be relied upon for informed decisions, the political parties should target giving half of this number alternative means of transport and place the rest of the people in different fields. For instance, what the Vice President suggested can be used to achieve this proposal.

Half of the number, if they can be identified properly, should be trained and be given cars assembled in Ghana. The motorbikes they use are expensive and so they can pay for half of the cost of the assembled cars. The people in the first group should be placed in areas where there is deficit in the transport system so as not to cause traffic in urban centres. The various Assemblies can be used to achieve such a goal. The state can train them to be used in developing urban centres.

The other group should be placed in areas with equal opportunities like their counterparts. The agriculture or the industrial sector can be developed properly to absorb the rest of the group. In fact, it should not be a lightly-taken stance by the state or any political party to legalise Okada because it gives livelihoods to people. The state can solve the unemployment problems of the people doing Okada if the option of giving them vehicles is used with keen enthusiasm to build the roads in rural areas as well as develop the other sectors that really affect growth.

The political parties should not settle on votes to reach the decision of legalising Okada or not. The state should take a view concerning the place of Okada in a country with developed transport systems and cities. If Okada is legalised with all the challenges associated with road construction, no problem will be solved. For when “a bird flies off the earth and lands on an anthill it is still on the ground” (Igbo proverb).