Nigeria Police Shoot You For Money Like While Black Abroad 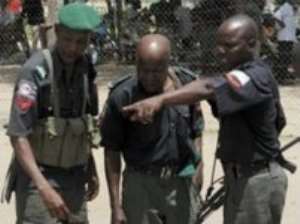 Is it only outside Africa that a police would shoot you while Black? In many African countries, lack of respect for the sanctity of lives are increasing while we protest about the lives of our brothers and sisters wasted for no other reason than the color of their skin abroad.

There is a difference. Regardless of who you are as a Black man, you can be harassed abroad. A sitting USA' s Senator, Tim Scott is not above par. So in America, they Internationally remind you that you are Black. Ask Harvard Professor Louis Gate. When some Africans claim that they are free from harassment and are appreciated abroad, some of us laugh. In Africa, if you are rich, a politician or a big man, Police will protect you. But if you decide to become a member of the Opposition or criticize the politicians they would send the Police after you like in Turkey. Most African politicians cannot stand the scrutiny of vigorous and Free Press.

Police brutality has reached its peak worldwide but African Police know that the people they arrest, brutalize and kill unnecessarily look and belong to the same "race" like them. OBJ once gave the Police "shoot on sight" order in Lagos. Oppressors have been treating people without voice or power as less than human since the beginning of time.

The worst victims of Police abuse are Youths for fear of their political activism and to suppress their concerted efforts demanding the change of status quo promoted by the major political parties. One political party would succeed the other without any difference in ideologies but the same players jumping from one party in opposition to the one in power. If they cannot get nominations in one party they jumped to where the nomination is assured by throwing money around.

Nigerian Police are going further by arresting and putting innocent people in holding cells until they cough up money. It was some form of "tax" on transport workers who in turn raise fares on the passengers. It extended to almost any vehicle and now to moving on the street if Youths look exotic, well or fancifully dressed.

Police have become "tax" collectors in Nigeria for maintenance purposes. Some years ago, some of the junior officers were bold enough to table the reasons they collect "taxes" from the people while moving. Usually they concentrated their attention on motorists but on a "dry" day they may raid any Bus stop and load those waiting into their vehicles straight to the Police Station. This is where you bail yourself out or a relative has to bail you out. The junior officers sometimes working without salaries testified that they have to repair Government vehicles, buy their petrol and pass on money up to Oga at the top.

Nevertheless, the practice of harassing people for money never stopped. Each time there is a new Chief of Police, each vowed to stop brutal street panhandling by police officers. Indeed, transport conductors and drivers have been shot for moving or their vehicles without paying police on the streets. As far back as the regimes of Babangida and Abacha when it was called Family Allowance. Later on, the Head of State OBJ called police recruits thugs and members of nefarious activities. Little has changed since.

"In practice, these checkpoints have become a lucrative criminal venture for the police who routinely demand bribes from drivers and passengers alike, in some places enforcing a de facto standardized toll. Motorists are frequently detained and endure harassment and threats until they or their family members negotiate payment for their release. Extortion-related confrontations between the police and motorists often escalate into more serious abuses. The police have on numerous occasions severely beaten, sexually assaulted, or shot to death ordinary citizens who failed to pay the bribes demanded."

A friend was told by a foreign police officer that if he was in Africa, he would have been brutalized for claiming his right. It was enough to keep his mouth in check because he realized the foreign police uttered the truth. The point he was making here was; Africans are treated worse in their own countries. Opinions vary on this but African Police generally respect those that are well placed in their communities for fear of losing their jobs while the poor are treated shabbily.

We can say the same shabby treatment is perpetrated on the poor abroad until the video phones and some court cases expose the injustice. The reason for comparing cases of Police abuse in Africa to those abroad has to do with the fundamental rights of people no matter where they are in the world. African leaders and politicians must be held responsible for the abuse of their people, not only locally but Internationally, especially during elections. These leaders have experiences of how foreign police and immigration disrespect them from the Airport, in their cars to their houses.

Nigerian politicians are being put on notice and even outright banned by the British and American authorities when they rig elections. All it takes is the threat of withholding their visas to Europe or America, their dream destination point; where they launder money to live comfortable lives they refused to provide in their own countries. This type of threat has a double edge sword. Africans resent foreign powers influencing African local policies. They have done it in the past at the expense of our sovereignty or to the detriment of our political and economic interest.

We have to be careful. Humans unguarded indulgence shows up when nobody is watching. Once we realize other people, community and countries are watching, we are put on our best behaviour and do act accordingly. This is why International Observers are invited during elections by many countries claiming they have nothing to hide since voting is free and fair. It also serves International Human Rights Organizations watch. This boils down to trust and verify the commitments we make as members of high moral values, which is dwindling worldwide today. Otherwise people with ulterior motives would hijack the process for their own self-interest. No Country or people are free from bias out of self-interest.

Anyway, who listens to the Youths at home or abroad these days without confrontations and Police brutalizing them? Youths cry out so that they can be safe at home or abroad. If we want them to stay home in their countries, villages and cities we must encourage and incentivize them. The same way a Londoner or New Yorker thinks the world starts and ends in their gloried ghettos.

Political and religious organizations exploit these hopeless situations the Youths have found themselves; to be recruited as followers. Instead of the Youths demanding better governance like their parents and grandparents, they have been anesthetized to find solace in mobile phones, crumbs as handout, travel agents promoting foreign countries and infatuation with foreigners or promise of rewards in Heavens by pastors and imams. They ignore the fact that Heaven can only help those who help themselves, by not waiting for God to pick up their calls. Youths cannot call on dead or old Freedom Fighters to fight for them. Your Freedom is in your