Okada Will Be Safe If Business Is Legalised, Regulated — Okada Riders Association 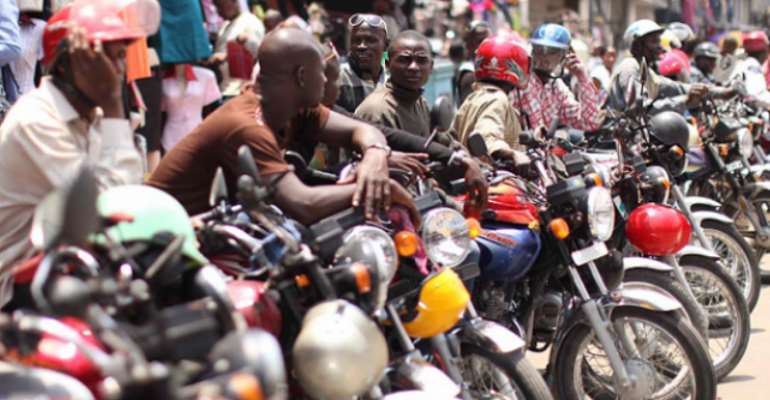 The Okada Riders Association has reiterated calls for the legalisation of the okada business in Ghana with the assurance that its operations would be safer.

Section 128 (1) of the Road Traffic Regulations, 2012 (Legislative Instrument 2180), states: “The licensing authority shall not register a motorcycle to carry a fare-paying passenger.”

But flagbearer of the opposition National Democratic Congress, John Mahama, has promised to legalese okada should he be re-elected on December 7, 2020.

The promise has invoked an unending debate in Ghana.

Speaking on Eyewitness News, the Public Relations Officer for the Okada Riders Association, Solomon Akpanaba argues that, with the necessary training, the number of accidents recorded among motor riders will be reduced.

“Even drivers who are trained and given licences get involved in accidents. So if the motor riders are not given any training whatsoever, they should not be blamed at all. It is not their fault that there are no training schools for motor riders. Besides, no one has the right to attribute the accidents to the okada business. How do you draw the line between the commercial ones and the private ones?“

He further argued for legalising and regulating the okada business.

“Under regularised systems, the carelessness of some motorbike riders will be reduced because they will belong to unions that will control them. What at all is it about regularisation that some people are against? Under a regularised system, commercial riders will be differentiated from private ones. They can be tracked and traced. Indisciplined riders can easily be traced and arrested. Remember, the riders will also pay tax, they will as well be taken through proper training and licensing,” Solomon Akpanaba argued.

The 2018 National Road Safety Commission report shows that over 500 people died as a result of motorbike accidents, lesser than what cars recorded.

Describing the operationalization of okada in the country as a “risky business”, Dr. Bawumia announced the government's proposed alternative to offer new cars to the operators on a lease basis in order for them to carry out their activities in a much safer manner.

“You don't want to finish graduate school and then make a life from okada riding. You can have a better option, and we will give you a better option. So yes, we will not legalize the okada business in Ghana. It may be a tough decision but it is in the interest of Ghanaians. We are having discussions, but we will stick to our decision to provide a better alternative for the okada riders. Let give them an opportunity to buy safer vehicles through lease and pay over time. It is a better option than what the alternative is”, he said.

The NDC, however, insists that they have a blueprint to making the operationalization of the okada business safer and more convenient.