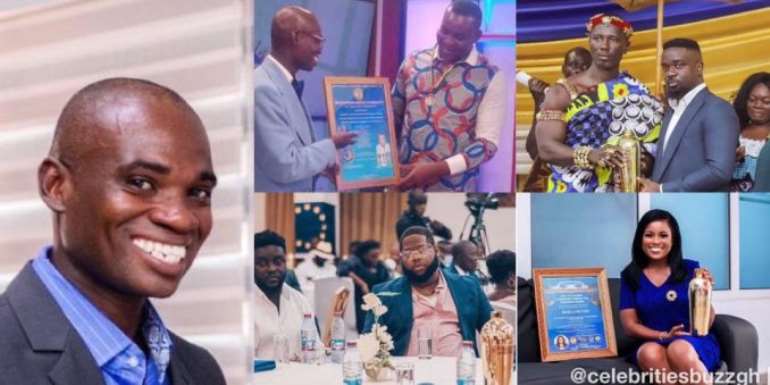 When multi-award-winning Ghanaian rapper, Sarkodie received a fake 'UN Kofi Annan Excellence Awards,' he immediately took to social media to brag about it.

During the same time that the 'UN Award' was handed to him at the Alisa Hotel in Accra, musical youngster Kuame Eugene had toppled him for the coveted 'Best Artiste of the Year Award' at the Vodafone Ghana Music Award (VGMA).

Sarkodie lost the top music award and the biggest bragging right in Ghana, but he was compensated with a “UN Award” and when he shared the success story with his fans, he ended up throwing the spotlight on the organiser of the Global Blueprint Excellence Award, one “Dr” Kwame Owusu Fordjour – a man who has described himself in many quarters as the Global Ambassador of the United Nations.

The rapper is not the first person to have received the 'UN Humanitarian and Excellence Awards.' Other distinguished personalities, including the Vice-Chancellor of the University of Ghana, Professor Ebenezer Oduro Owusu and the Second Deputy Speaker of Parliament, Alban Bagbin were awarded by the organiser this year. The administrator of Ghana's foremost institution of higher learning was presented with the 'Companion of Global Public Excellence Award' for his leadership and vision for humanity.

The other awardees were, the Ashanti Regional Chairman of the governing New Patriotic Party (NPP), Chairman Wontumi, Berla Mundi of TV3, Angel FM Morning Show host, Captain Smart, Daughters of Glorious Jesus, musician D-Black, Natalie Fort of TV3, and DJ Black of Joy FM, among others. A total of 21 people received the award.

Some Ghanaians have been quick to label the award scheme as a scam but others have praised the organiser for his smartness. I bet those Ghanaians who have taken issues with the Award scheme may not have done that had it not been linked to the United Nations (UN) and the foundation of late UN Secretary-General, Kofi Annan.

Kwame Fordjour is reported to have said that the Global Blueprint Excellence Award is organised in collaboration with the United Nations and the Kofi Annan Foundation, a claim that has been disputed by the UN office in Ghana.

But let me state that it is never wrong to create an award scheme to recognise the extraordinary and heroic works of people. No law is breached by doing that. This is done the world over. Prizes in whatever form are a highly visible indicator of recognition. They shape the incentives of the recipients to remain true to their chosen career and strive for excellence.

In Ghana here, there are many awards schemes that started from a position of unknown to a place of known. Today, a few of these schemes are recognised as prestigious platforms because of the hard work of the organisers. I am by no means suggesting the organiser of the Global Blueprint Excellence Award is not a hardworking man. Far from it.

In fact, Kwame Fordjour is one of the hard-working people I have heard and read about in 2020 because of the ease with which he assembled the bigwigs in society. Perhaps, his chief sin which everyone would be quick to point out was the immediate recognition he tried to cloth his award scheme by claiming to be working with the UN and the Kofi Annan Foundation.

In a Facebook post shared on his barely four-month-old page 'Global Public Excellence' on August 30, 2020, he claimed he had been appointed by the then UN Secretary-General to spearhead the award scheme in Africa. He wrote that:

“As part of the full Global interactions, Inter-Governmental Researches and reports of the Globe on each region of the World spearheaded by Ambassador Dr Kwame Fordjour's Group, Former Secretary-General institutionalized the Global Public Excellence to award (yearly) World Excellence in which Amb. Dr Fordjour was honoured to Chair in Africa which needed Global Excellence by practices and Exemplary Leadership.”

But the United Nations in Ghana has issued a disclaimer saying it has no affiliation with “Dr UN” and the Global Blueprint Excellence Awards in whatever shape or form. In a strongly-worded statement issued on Sunday, the world body said “all genuine UN notices follow strict rules and procedures and are announced/published on UN websites.”

If he had not sugar-coated his award and said all those things that are being repeated in the media today, Sarkodie, for instance, would not have abandoned the so-called prestigious Vodafone Ghana Music Awards 2020 for the Global Blueprint Excellence Award.

If ever there is a lesson that this episode serves us, it is that we are all vulnerable at some point – rich and poor, strong and weak, politicians and musicians, and chiefs and lecturers, etc.

He could be reached at [email protected]