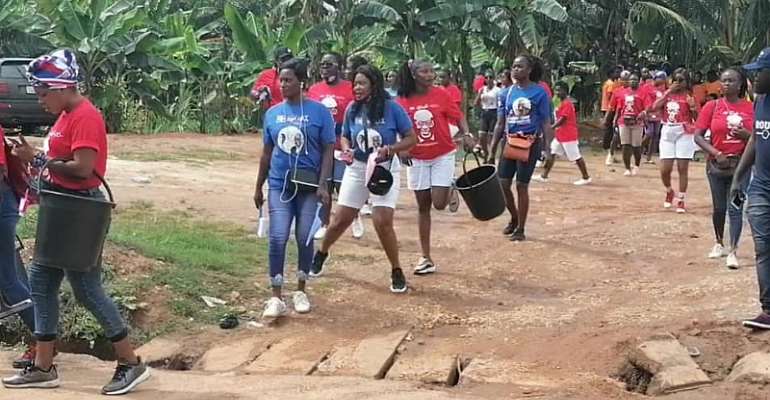 Loyal Ladies, a volunteer group under the Youth Wing of the New Patriotic Party (NPP) have fired up to canvass for votes for the ruling party in the upcoming December 7.

The role of women more especially the young women in the success of a political party in elections cannot be overemphasized. As a result, the goal of loyal ladies as a group is to reach out to the electorate in all the nooks and crannies of the country to ensure success for the New Patriotic Party in the upcoming 2020 December election.

Over the weekend the NPP loyal ladies of Twifo Praso under the Twifo Atti Morkwaa constituency in the central region held a car washing campaign as an avenue to send out campaign messages.

Speaking to the commander of the NPP women's group Clara Nana Adoma Afranie, she noted that the car washing campaign was a platform to campaign for the party to retain power to continue with good policies that are been initiated and help bring prosperity to Ghanaians.

The occasion saw the Parliamentary candidate of the NPP for the area, Honourable Ebenezer Obeng Dwamena a former Presiding Member of the Twifo Atti-Morkwaa District Assembly gracing the occasion with the District Chief Executive and other party executives of the constituency.

The PC lauded the group and gave the assurance that they were not relenting or resting on their oars but working so hard to retain the seat and help bring development to the area.

The PC said with several developmental projects which are at various stages of completion, there was the need to continue with the NPP government.

Notable among the projects currently ongoing is the bridge across the Pra River, the Aboabo junction through Mampoma to Dunkwa-On-Offin road.

According to him, his tenure as MP he will ensure a DVLA office is established to help reduce the frustration of travelling to major cities to have roadworthy certificates done.

He added that he will ensure the expansion of the lorry terminal to help create other employable opportunities.

He lauded the incumbent MP for the ongoing projects and pledged to more when the baton is finally handed to him.