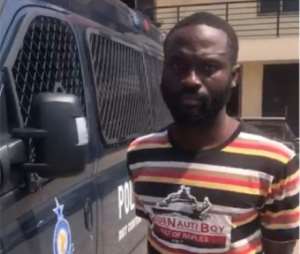 A 29-year-old man, Kwaku Oduro, also known as Agya Kwabena Oppong, a taxi driver and a native of Konongo has been jailed by an Accra circuit court for 12 years for carjacking.

According to the prosecution, on 31 August 2020, Kwaku Oduro hired the services of a taxi driver around 2:30 am from Achimota overhead to Anyaa.

However, a few meters to his desired destination, Kwaku Oduro signalled the driver to stop exactly where two young men were by then waiting.

The taxi driver sensed danger upon seeing them and immediately sped off with Kwaku Owusu to the nearest police station and called out for her.

The police took custody of Mr Oduro for investigations into the complaint of the driver.

At the station, another complainant who had also fallen victim to car snatching the previous day and lost his Daewoo Matiz taxi cab in the process, identified Kwaku Oduro as the same suspect who snatched his vehicle through the same modus operandi.

Kwaku Oduro could not deny the allegation and broke down in confession, pleading for forgiveness.

He was subsequently arraigned and found guilty of an attempted robbery by a Circuit Court.

He was convicted to 12 years imprisonment with hard labour, as he awaits further trial for his involvement in the other carjacking crimes.