By Anton Harber - The Conversation 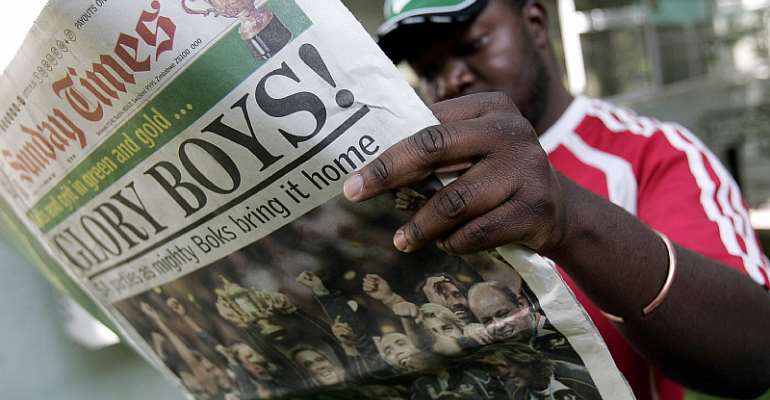 Anton Harber, the veteran South African journalist, editor and journalism professor at the University of the Witwatersrand, has a new book out. So, For the Record: Behind the Headlines in an Era of State Capture is a deep dive into the conduct of the media as mega corruption and state capture engulfed and eventually brought down President Jacob Zuma's administration. Politics editor Thabo Leshilo asked the author to provide the highlights.

What prompted you to write the book?

For one thing, it is a great story to tell, complete with all the ingredients of a thriller: brothels, spies, brown envelopes and honeypots, all laced with intrigue, deceit and backstabbing. My interest, though, came from a concern that our community of journalists was not dealing properly with the series of journalistic fiascos at the Sunday Times , the country's biggest and most powerful newspaper.

I was on a panel commissioned to conduct an internal investigation at the paper in 2007, after a similar series of journalistic disasters. Our far-reaching recommendations were not implemented. And so, perhaps inevitably, the paper went off the rails again in 2011-6 with another series of stories that boosted those trying to capture state institutions for corrupt purposes. The paper had to retract and apologise for these disastrous stories.

As journalists, we hold those in power to account and demand full transparency from them. But we also wield public power, so I think it is crucial that we hold ourselves to account when we mess up. If we don't, the politicians will step in and that would be a disaster.

Media self-criticism is not just important to improve our journalism, it is a political, professional and moral imperative. That is why I thought it important to take a deep dive into what happened at the Sunday Times.

The other reason is that this same period saw some of finest and most effective investigative journalism in this country. The #GuptaLeaks exposé in particular contributed to bringing down a president. The email leaks provided the evidence of the extraordinary and malign influence the Gupta brothers – who stand accused of having captured the South African state for their enrichment – had over the president and his family.

Taken together, I thought these parallel tales would provide insight into the highs and lows of journalism, showing its importance and value, but also its limitations and problems. I hope to enable a better public understanding of the work of journalists and the media, as I think that there is confusion over what we do and don't do in our newsrooms.

This was not just a Sunday Times issue, but it was about the nature and state of our media, and hopefully I offer some insight into that.

As someone who was involved in the 2007 report, knew all the characters well, and who had been part of judging panels for the Taco Kuiper Award for investigative journalism, which recognised the Sunday Times for one of these stories and then withdrew that recognition , I had a rare personal perspective on events.

In a way, the book is a personal account from an insider, and I hope I bring to bear an understanding of journalism derived from 40 years of practice, including my own fair share of journalistic blunders.

Why do your findings matter?

I hope that I show how good journalism nourishes and feeds citizenship and democracy, but also that it is an imperfect profession working in imperfect structures in an imperfect society - and we need to face up to the reality of what this means.

Journalism can do some good, and it can do a lot of harm, and it usually does both. We have to try and understand how to try and do more good and less harm. This is particularly important at a time when the work we do is facing the triple onslaught of political, financial and disinformation storms.

An important element of the story is how state structures, such as the State Security Agency and Police Crime Intelligence , deliberately and malevolently interfered to distort and harm our journalism for their own purposes. The question to ask is:

what was it about the Sunday Times that made this newsroom fall for these tricks, when others didn't?

We have a lot to fix in this country, and as journalists we can start by trying to fix our journalism and our media.

What are the implications for the media?

What I highlight is that this is not a problem affecting one newspaper. The problem runs deep in the structure and history of our media. Hopefully, those reading my book will get a better understanding of this and be better equipped for a discussion about what needs to be done to make our media and our democracy work better.

We are facing an onslaught of disinformation, enabled by social media, and we cannot counter it unless we rebuild journalism so that it is a valued and trusted part of our society.

How can media houses and journalists fix the problems you identify?

First we need to understand the problem and its causes. That is what I explore in the book. Part of this is to see that this is not a problem for media houses or journalists alone. This is a social, political and economic problem that can't be solved by the media industry on its own. We have to work with the private sector, the public sector, the philanthropic sector, civil society and the state to ensure we have a media that meets our society's needs.

We cannot deal with the issues of professionalism and accountability without solving the problems of the fundamental economic structure of the industry. To be a quality industry, we need to be a strong one, and to do this, we need to find a new way to restore its financial foundation.

We are in the extraordinary position where philanthropically funded journalism appears to be more sustainable than the traditional advertising-driven model. This is an inversion of what we always accepted as reality. We are caught in a bind: we need citizens to value us enough to pay for our services in some form, but we don't have the resources to produce the journalism that would show that value. We first have to recognise that this is a national and societal problem, not just a media one, and then we can tackle it.

Anton Harber was a member of the internal panel appointed in 2007 to examine problems at the Sunday Times. He was a judge in the Taco Kuiper Award for Investigative Journalism and the Global Shining Light Awards, both of which recognised one of the stories dealt with in the book. The Taco Kuiper Award panel withdrew Sunday Time's 2011 runner-up award in 2018.

By Anton Harber, Caxton Professor of Journalism, University of the Witwatersrand