US Based Media Mogul and Showbiz Guru; Mr. CNN Losses Father in London 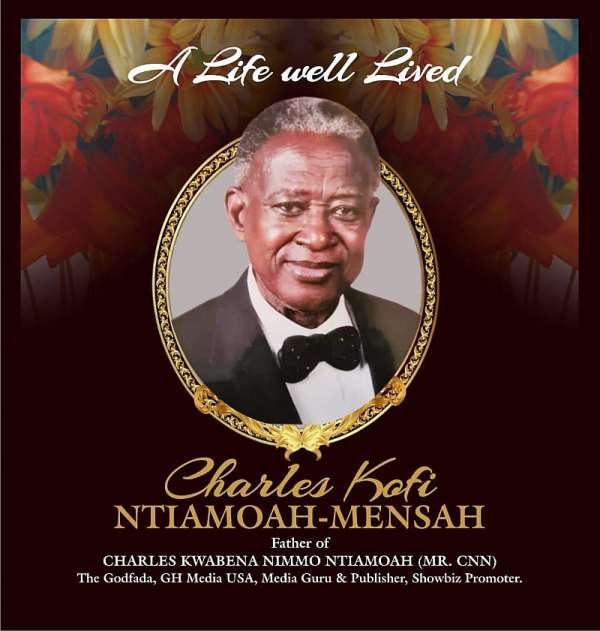 The US Based Media; Mr. Charles Nimmo Ntiamoah-Mensah aka Mr. CNN also the host of the new online TV show; Evangelist Nimmo Presents The CUMIEES Show on 3G TV FB & Youtube) is in mourning. He officially announces the passing of his late dad; Charles Kofi Ntiamoah-Mensah, Charles Snr on Saturday, Sept, 5th, 2020.

A life well lived for 59 years in London. He left behind his widow; Elizabeth, Mr. CNN, and two brothers, Zack and David as well as 6 grandchildren. Mr. Ntiamoah-Mensah was a Chartered Accountant by profession and was also Co-Founder and Treasurer for the London based charity organization; Ghana Union London, also a member of Aduamoa-Kwahu (AKIS) and Kwahuman Association of UK.

In paying tribute to his late father whom he was named after, The CEO of 3G Media Group and well-respected Godfather of GH Media in US wrote on his Facebook wall; "My Late Father, the Smart Chartered Accountant worked for a big company; Commonwealth Development Corporation for nearly two decades till his retirement. Dad dedicated his life to community service and was a Co-Founder/Treasurer of Ghana Union London U.K for a long period of time. He advised me to learn computers which I did and then enrolled me to learn about Offset Printing and Desktop Publishing at the GUL's then location @ 431 Caledonian Road.

My Design, Printing, and Publishing skills were the beginning of the journey to owning my own Media House and Showbiz Company. I designed the flyer for Daddy Lumba and supported his first London concert as well as Lee Duodu in 1994 with a GH radio station called. My first taste to making money from music was selling the then-new album in Vinyl by C.K. Mann entitled: Adwoa Yankey which became a classic hot single. I sold for 2 quids and made 50p each profit. I moved to the US in 1995 after completing my Bachelor's degree and move to the US to chase my American dream.

While the parents were not enthused about the decision of moving, eventually I made them proud because they saw my work on the internet featuring Ghanaian events in America and around the world on Ghanaweb. This is was prior to the introduction of social media and cameras on cell phones.

Many ppl in London who saw the internet news coverage would call the parents and inform them about the hard work of their son promoting Ghana on the internet The parents will then inform me about it to keep working hard and build a good name for myself. My dad advised me to be honest and not lie about ppl in news to destroy their reputations.

Proud to say In 20 yrs, not a single person had complained to them about me publishing lies about them. It's not about fame by lying but maintaining respect and a good name.

Mr. Ntiamoah-Mensah would be laid to rest in London on October 9th, 2020. A funeral will be held next year in London and then also celebrate his life by his son; Mr. CNN in New York City, USA

On behalf of the Ntiamoah-Mensah Family, Mr. CNN extends his sincere gratitude to all the sympathizers all over the world for their overwhelming phone calls to console the family, "May the Good Lord richly show his blessings on everyone".