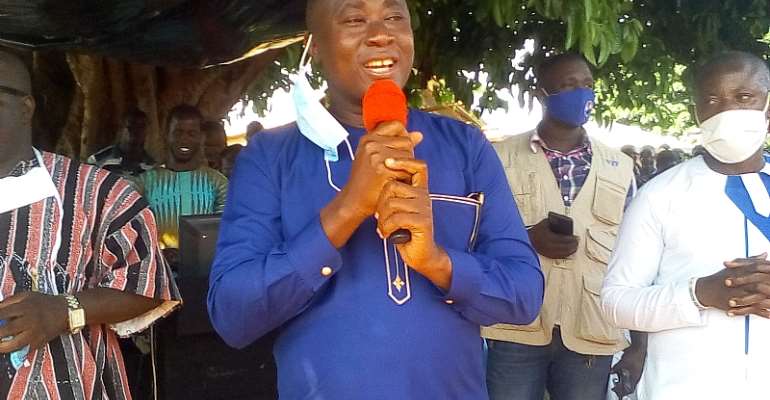 The Member of Parliament for the Atebubu-Amantin constituency, Hon. Kofi Amoakohene has supported 2 communities within his constituency in furtherance of their development agenda.

The MP who doubles as the Bono East regional Minister presented 100 bags of cement and two trips of sand to the Fakwasi community towards the building of a police post and is also investing thirty-thousand Ghana cedis of his personal resources towards the construction of a dam for the people of Bompa.

At separate gatherings to announce the packages, the MP advised the 2 communities to shun ethnic politics and vote for the New Patriotic Party in the December general elections for accelerated development.

He said within the first term of the current government, it has been able to extend electricity to Fakwasi and is currently constructing the road that links the town to the district capital Atebubu and Busunya in the adjoining Nkoranza north district among others.

Hon. Amoakohene told the gathering that plans are far advanced to get the mobile telecommunications network MTN to erect a mast at Fakwasi to ease the communication difficulties faced by the people.

He also disclosed his intention to get the people of Bompa electricity and a CHPS compound after the completion of the dam project.

The Atebubu-Amantin municipal chief executive Hon. Edward Owusu said the road project will change the face of the Fakwasi community since vehicular traffic from both the Nkoranza north and south districts to Atebubu-Amantin and the other 4 surrounding districts in the Bono East region will flow through the town with potential opportunities for commerce.

He assured the people of Fakwasi of the readiness of the works department of the assembly to assist them in the construction of the police post adding that power will soon be extended to areas within the Fakwasi community without electricity.

The Omanhene of the Fakwasi traditional area and overlord of Bompa, Nana Kwame Effah Pimpim II praised both the MP and the MCE for the massive development his area has enjoyed within the short time that they have been in power and assured them of the support of the people.

He urged them to help rehabilitate the basic school at Fakwasi which condition he described as deplorable.