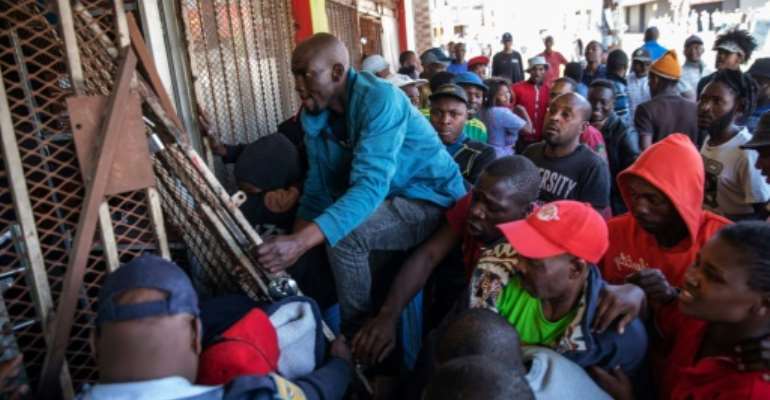 The group said xenophobia remained widespread in South Africa despite a government action plan rolled out in May 2019 to combat "intolerance".

Foreign workers are often victims of anti-immigrant sentiment in South Africa -- the continent's most industrialised economy -- where they compete against locals for jobs, particularly in low-skilled sectors.

In a 64-page report, HRW said foreigners are scapegoated for economic insecurity in one of the world's most unequal societies, where unemployment sits above 30 percent.

It relayed testimonies by over 50 African and Asian nationals of "routine" and "sometimes lethal" xenophobia.

A Bangladeshi shop owner told the group his business was ransacked during a bout of xenophobic violence last year.

He was then forced to stand guard at the looted premises for three days without sleep before police eventually intervened.

"I am so angry," said another Congolese shop owner also affected by the 2019 raids.

Anti-immigrant sentiment can degenerate into mob violence but also manifests itself on an everyday basis.

Foreigners told HRW they sometimes suffered verbal and physical harassment in their daily interactions with locals.

A common insult in South Africa is "kwerekwere", a derogatory word for "foreigner".

In August last year, Congolese student Donette Ngonefi was allegedly beaten up by fellow students for being elected class monitor at a Cape Town high school, said the report.

Ngonefi was hospitalised for nine months and had not yet returned to school a year later.

Xenophobic attacks left at least 62 people dead in 2008, while another seven were killed by similar unrest in 2015.

Violence flared again in September last year, when armed mobs descended on foreign-owned businesses in and around financial hub Johannesburg.

The ensuing clashes left at least 12 people dead, of whom 10 were South African, according to the government.

It claims foreign-owned businesses are disproportionately targeted by crackdowns on counterfeit goods, and that migrants are arbitrarily detained for allegedly lacking the right documents.

According to the group, police are reluctant to protect immigrants and investigate crimes against foreigners.

Mobs armed themselves with spears, batons and axes during 2019's anti-foreigner violence. By GUILLEM SARTORIO (AFP/File)

The report calls for "more urgent, concrete measures" to protect foreign nationals, claiming the government plan has been "just words on paper" so far.

Author Kristi Ueda condemned the culture of "impunity" that "only emboldens others" and perpetuates violence against non-nationals.

"Non-South African nationals have suffered wave after wave of xenophobic violence and live in constant fear of being targeted," said Ueda.

"Government should hold those responsible accountable to the fullest extent of the law."

The home affairs department did not respond to requests for comment.

South Africa has long been a magnet for economic migrants searching for better job prospects in the region.

The country attracts people from neighbouring Lesotho, Mozambique and Zimbabwe.

Others come from even further afield including Congo, Ethiopia, Malawi, Nigeria and south Asia.

South Africa plays hosts to more than 2.2 million foreigners, ranging from political refugees and economic migrants to skilled expatriate workers, according to the last population census in 2011.