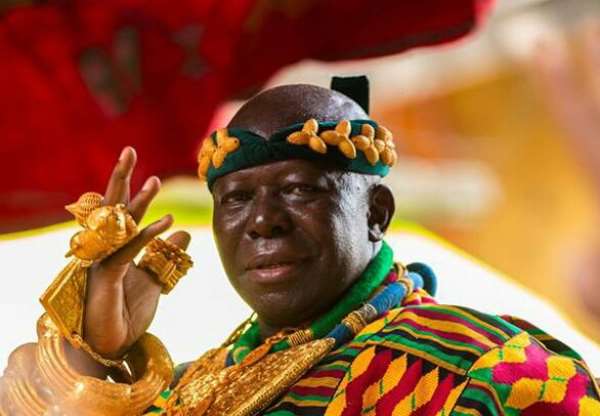 The Asantehene Otumfuo Osei Tutu II has urged members of the Ahafo Regional House of Chiefs to contribute their quota in the development of the region to improve the lives.

His statement was issued when President Akufo-Addo inaugurated the Ahafo Regional House of Chiefs at the Pastoral Centre in Goaso, the regional capital.

Speaking on behalf of Asantehene, the Chief of Bompata, Nana Effah-Apenteng said for them to be named as members of the Regional House of Chiefs means they have a lot to offer in bringing development to the doorsteps of the people.

According to Nana Effah-Apenteng, the Regional House of Chiefs must put in endless efforts to solicit for developmental projects for the people from the government, companies, individuals among others because development was the major reason residents voted massively for the creation of the region.

He explained that the Regional House of Chiefs must lace-up with the representatives of the central government in the region to find best ways to develop it because the expectations of residents are high although government has begun rolling out some developmental projects in all sectors.

He mentioned that residents will never forget and forgive them if they are unable to help for development to thrive in the years ahead. To him, the members must not solely depend on the government for development but find an external approach to foreigners to come in to help.

He advised them to desist from using their positions for personal gains indicating that Otumfour Osei Tutu II is keenly monitoring their actions and he will spill fire on anyone who seeks his personal interest. He also urged them to approach Asantehene in seeking ideas to boost development in the region which is part of the Ashanti Kingdom.

"Otumfour Osei Tutu (II) wish you well as you take the mantle," he stated.

President Akufo-Addo tasked the members to assist the government to deliver for the people of the region. He said Ahafo is at his heart because its contribution to the growth of the country is remarkable.

He expressed that the government has vowed to develop all the six new regions to catch up with the 10 traditional ones and to achieve this, chiefs must get involved.

He said the government will provide all the necessary items to make them work effectively to help attain the common goal of both the government and the people which is development.

"I'm glad you've confirmed that Ahafo is seeing development after creating the region," he told the chiefs.

President Akufo-Addo further mentioned that his administration has better plans for Regional House of Chiefs in the country due to the good rapport between government and chiefs.

He presented two vehicles to the Ahafo Regional House of Chiefs to help them facilitate their activities as expected.

The President and his team progress to inspect the site where the ultra-modern house of chiefs complex is to be constructed.