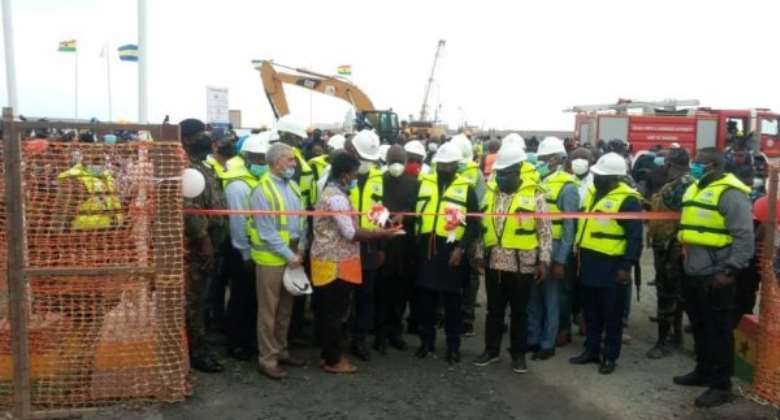 Vice-President Dr Mahamudu Bawumia has cut the sod for the construction of the first three-tier interchange in Takoradi at the Kwame Nkrumah Roundabout.

The interchange, expected to ease traffic flow considerably and shorten travel time for commuters, is in fulfilment of the New Patriotic Party (NPP) 2016 campaign promise to provide the Metropolis with better road networks.

Speaking at the sod-cutting ceremony, Dr Bawumia said the Takoradi interchange would bring to six the number of interchanges the Government had started in its first term comprising the Tema, Obetsebi Lamptey, Pokuase, Nungua, and Tamale interchanges.

He explained that the construction of the Post Telecommunication (PTC) interchange was part of the Master Project Support Agreement between the Government of Ghana and the SinoHydro Corporation with the first phase covering 441 km of roads and two interchanges; the Tamale and Takoradi interchanges.

He said the PTC Roundabout was part of three roundabouts that were on the periphery of the Central Business District (CBD) of Takoradi with the others being the Paa Grant and the Shippers' Roundabouts.

Dr Bawumia said the project fitted into the Government's programme of improving the road infrastructure of the Sekondi-Takoradi Metropolis and modernise the Twin-City.

The Government is also undertaking some major road improvements in the Metropolis including the road network around the Paa Grant Roundabout, of which a loan agreement had been secured with the Phase I expected to begin before the end of 2020.

Some benefits it would bring are minimizing congestion, improving travel time, ensuring safety of commuters and addressing the drainage challenge around the roundabout.

It is expected to be completed in 30 months and would be undertaken by Mssrs SinoHydro Corporation Limited.

Others are the Tuna Processing Factory in New Takoradi, which would create about 1,500 jobs in three shifts, the revamped WAMCO would offer 250 jobs, while the Takoradi Incubation Centre, currently under construction, is expected to provide 100 jobs.

The new Sekondi Youth Centre would create additional 100 jobs while the GNPC Operational Headquarters would add 200 bringing the total jobs in the region to 5,500.

Gov’t to set up 5-member committee to lead extensive stakeho...
41 minutes ago