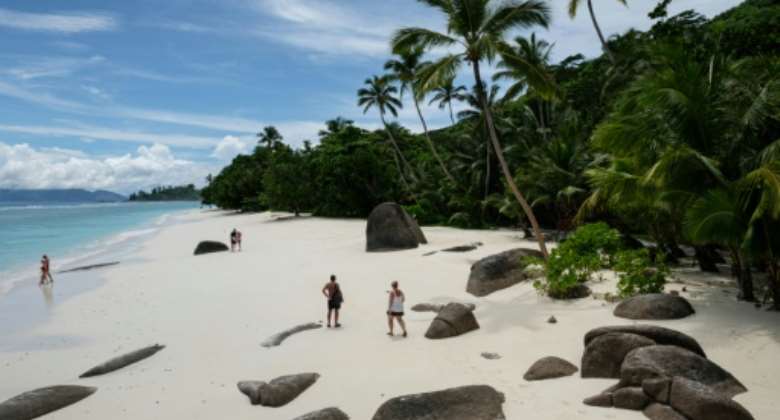 Seychelles will vote in a pivotal election next month as it battles an economic slump caused by the coronavirus pandemic. By Yasuyoshi CHIBA (AFP/File)

Seychelles President Danny Faure will face two challengers in next month's election, the electoral commission said Wednesday, including a veteran opposition leader who lost the last poll in the Indian Ocean archipelago by just 193 votes.

The election comes at a pivotal time for the nation that counts 115 islands off East Africa, with its vital high-end tourism industry on its knees after the borders were closed because of the coronavirus pandemic.

It also comes as the ruling Parti Lepep, which is known locally as the People's Party and has been in power since 1977, faces an unprecedented challenge.

The opposition Linyon Demokratik Seselwa party (Creole for the Seychelles Democratic Union) won a parliamentary majority in 2016 legislative elections, the first time an opposition party had done so since the country's return to multiparty politics in 1993.

The fallout from the crushing defeat led to then president James Michel -- narrowly re-elected the year before -- to hand over the presidency to Faure, who will contest his first election in the October 22-24 vote.

Ramkalawan is expected to be the main challenger after losing to Michel in 2015 by a mere 193 votes.

However the country's opposition did not rally behind a single candidate.

The third person approved to stand is former tourism minister Alain Saint-Ange of the new One Seychelles party, which has vowed to liberalise cannabis use and install a government of technocrats.

President Faure told the media that if he wins, he will set up a national unity government to overcome the economic crisis sparked by the pandemic.

"These are the most important elections in our country's history, because they take place at a time when the country is facing economic and social difficulties caused by Covid-19," he said.

The Seychelles closed its borders in March to prevent the spread of the virus.

The islands are a haven of luxury tourism, welcoming more than 360,000 visitors in 2018, twice as many as a decade before and nearly four times the population of 95,000.

Hundreds working in tourism lost their jobs, and the Seychellois rupee shed more than 40 percent of its value against the major foreign currencies.

Normally the country holds separate legislative and presidential elections, but they were brought together this year to save public money.