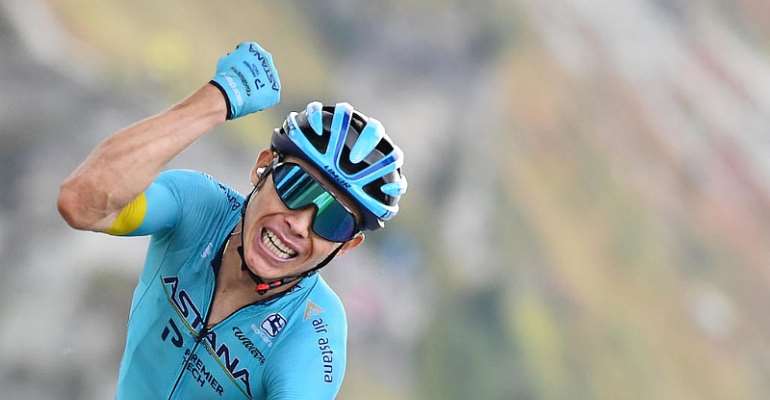 Miguel Angel Lopez took the 17th stage of the Tour de France on Wednesday after a gutsy surge to the 2,300-metre high finish in the alps.

"You dream of days like this," said Lopez. "But you don't ever know if such a thing can happen."

As the Astana rider kept his composure to win his first stage in the 2020 race, a battle royal was unfolding behind him.

Yellow jersey contenders Primoz Roglic and Tadej Pogecar fought to either extend or eat into the lead.

Roglic emerged the victor in the all-Slovenian skirmish. He finished 15 seconds behind Lopez and 15 seconds in front of Pogecar.

The 30-year-old Jumbo Visna rider enhanced his overall lead to 57-seconds over Pogecar with three competitive stages remaining before Sunday's traditionally ceremonial procession between Mantes La Jolie and the Champs-Elysées.

Surge
Lopez, who rose to third overall, moved for supremacy six kilometres from the end of the stage as it seemed that Richard Carapaz would hold on to follow up his second place in the 16th stage.

But the Ecuadorian was overhauled just over two kilometres from the line. He had been part of a five man group that broke away from the  peloton after 40 kilometres.

They stretched their lead to four minutes after 53 kilometres.

That breakaway eventually splintered into a trio of Carapaz, Julian Alaphilippe and Gorka Izaguirre.

Bernal abandons
A Carapaz victory for the Ineos Grenadiers would have added some gloss to a day which began with the announcement that the team leader and defending champion Egan Bernal had abandoned the race.

The 23-year-old Colombian had been in contention until losing more than seven minutes on Sunday's 15th stage between Lyon and Grand Colombier. He lost more time after finishing well down the field in Tuesday's 16th stage.

“We have taken this decision with Egan's best interests at heart,” said Ineos Grenadiers sporting director, David Brailsford. “Egan is a true champion who loves to race, but he is also a young rider, with many Tours ahead of him and at this point we feel it is wiser for him to stop racing.”

Bernal began the defence of his title nursing the back injury that forced him to withdraw from the Critérium du Dauphiné in August. He said a knee problem had added to his woes.

“This is obviously not how I wanted my Tour de France to end,” he said. “I have the greatest respect for this race and I am already looking forward to coming back in the years ahead.”

The 2020 race, which started in Nice on 29 August, culminates on the Champs Elysées in Paris on 20 September.

A/R: Journalists on tour with Regional Minister involved in ...
6 minutes ago

Focus on promoting human rights, be swift and fair in applic...
8 minutes ago