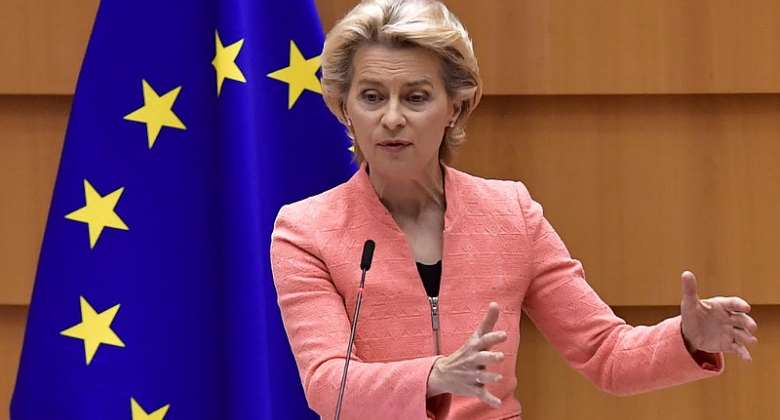 The Brexit withdrawal agreement, which UK prime minister Boris Johnson intends to revisit less than a year after it was signed by the EU and UK, took 3 years to negotiate, “line by line, word by word”, von der Leyen reminded her audience.

She said the EU “would never backtrack” and that it could not be unilaterally changed, declaring “This is a matter of trust and good faith.” Von der Leyen then quoted former British Prime Minister Margaret Thatcher speaking in 1975 to members of her own party: “Britain does not break treaties. It would be bad for Britain, bad for relations with the rest of the world and bad for any future treaty on trade we may need to make.”

Brexit was just one subject in Von der Leyen's speech, in which she laid out her vision for a European Union, after a first year in office that was engulfed by the Covid-19 pandemic.

'Ambitious' target for reduced emissions
In line with the so-called Green Deal which she announced last year, von der Leyen outlined a new proposal to reduce greenhouse gas emissions by at least 55% by 2050, a target that she said was “ambitious, achievable and beneficial for Europe.”

Poland, which is heavily dependent on coal has already expressed concern about the new proposed target.

Von der Leyen said she hoped other countries would follow Europe's lead, noting that young people are pushing for change and that “what's good for the climate is good for business.”

On the economy, the commission president reiterated  the importance of strengthening the single market and supporting small businesses in the difficult economic times ahead, using the so-called NextGenerationEU funds, while noting where the bloc had already succeeded in mitigating the economic impact of Covid by loosening rules on state aid for businesses and chanelling EU funds towards protecting livelihoods.

EU brought stranded citizens home
Advertising a Europe that protects generally, she talked of the 600,000 EU citizens stranded abroad during the crisis who were brought home but pointed to a need for more co operation in health matters to strengthen crisis-preparedness and management of cross-border health threats.

Health policy is the responsibility of member states and responses to the Covid-19 pandemic varied considerably among the different EU countries.

Cheering European efforts  to try to produce a vaccine, she made clear the EU's intention would be to make any such vaccine available to countries around the world, declaring  that “vaccine nationalism puts lives at risk vaccine co operation saves them.”

Dublin Regulation to go
On the long running question of migration and asylum-seekers, von der Leyen announced the end of the Dublin Regulation, which governs which member state handles a new arrival's asylum claim.

A new system would have “common structures on asylum and return” and “a new strong solidarity mechanism” and a new strategy for the Schengen area. The aim is to relieve pressure on Greece and Italy where large numbers of migrants arrive seeking asylum within the EU.

Among plans to build a Europe “fit for the digital age”, the commission president announced plans for legislation for a trusted and secure European e-ID

Von der Leyen conveyed a Commission prepared to face the enormous challenges which lie ahead, strengthened by a renewed sense of unity and usefulness, borne from crisis - as is so often the case with the bloc.