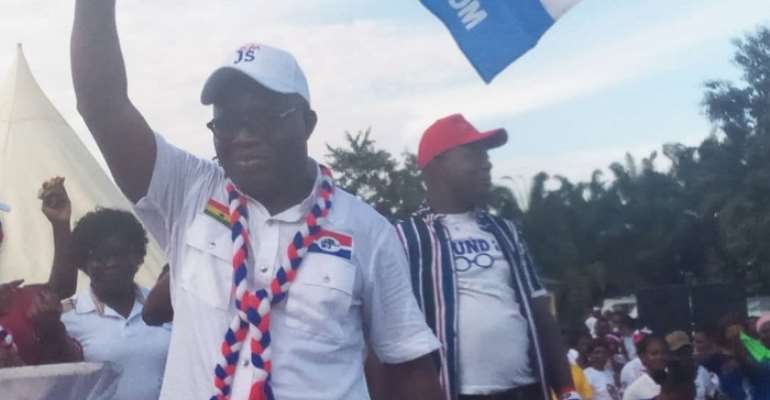 John Kobina Abuah Sanie, parliamentary candidate of the ruling New Patriotic Party (NPP) for the Mpohor Constituency of the Western Region, has stated that the ruling party was poised for a resounding victory in the December general elections.

He indicated that most sectors of the country’s economy had witnessed tremendous changes, citing the implementation of the pro-poor policies of the current government, particularly the Free Senior High School (SHS) programme.

He was speaking at the inauguration of the party’s campaign team and the 2020 camp launch of the NPP in the constituency.

He said, currently in Ghana, institutions like the police, military, prisons and fire service among others would not recruit people with junior high school (JHS) certificates but those with a minimum of SHS certificates.

“This is what Nana Addo Dankwa Akufo-Addo thought about and decided to give everybody that privilege to attend SHS free of charge,” he said.

“In the Mpohor District, over 2,000 children are benefiting from the free SHS,” he noted.

“NPP has initiated many vibrant programmes to uplift the living standards of the ordinary Ghanaian,” Mr. Sanie added.

He mentioned that over 500 people in the constituency had been employed by the Forestry Commission and a lot of the residents had also gained employment into the security services and other agencies.

“Victory is on the way coming, because the Akufo-Addo-led administration has so far met expectations of the people in terms of the delivery of life-transforming policies,” he emphasized.

“But all of us have the duty to move from house to house and campaign to enable our party win the upcoming elections massively,” he said.

The Western Regional Minister, Kwabena Okyere Darko-Mensah, stressed that the NPP had proven that “it is a party that could be trusted when given the mandate.”

He pointed out that good development policies ought to be sustained for a considerable number of years to deliver the intended positive results.

He said the construction of the road leading to the Mpohor town had been given to a contractor who had started work.

The chairman of the constituency campaign team, Anthony Evans Amoah, a former Regional Minister, appealed to the constituents to give the NPP four more years to continue with its pro-poor programmes.