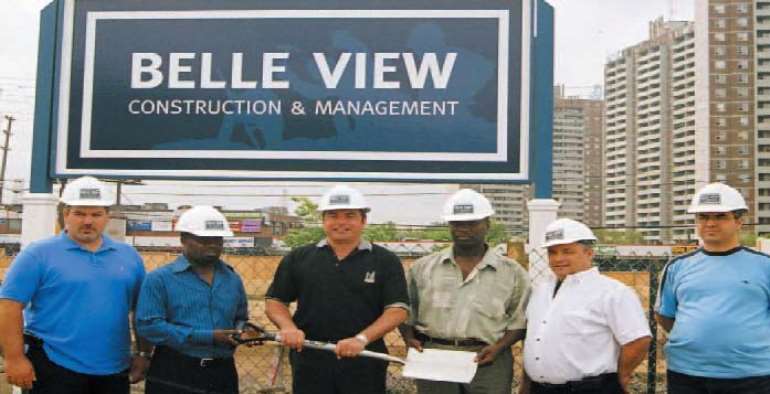 The Meridian Banquet Hall at 2301 Keele Street was alive with joyous shrieks as GACMAT(Ghanaian Amansie Canadian Multicultural Association of Toronto) hosted a fundraising Dinner Dance in support of their low-income housing project under construction at 2350 Finch Avenue West.

It was a night full of fun and amusement but at the same time it was time of recognition and a show of appreciation towards all the many hands that have stirred the building project to the stage where GACMAT could boast of having a pilot project, which attracts the interest of all three levels of Government here in Canada.

In his speech, Nana Agyapong introduced current members of the building committee who have devoted so much of their time to push the project ahead thus far.

He mentioned Rockson Owusu Atwima as a strong leader and chairman of the Association, Larry Boateng, a competent manager who connects very well with his subordinates and superiors with efficiency, esquire Owusu Mac, an individual who is well vexed in the construction business, and he Nana Agyapong, as chairman of the committee and also Mr. Richmond Bugyei-Twum their financial coordinator.

Far back as November 1999, Nana Agyapong said, "The City of Toronto held a competition to select a community-based developer to plan and build an affordable housing project at 2350 Finch Avenue West at Weston Road." He said there were many entries in the competition but GACMAT with their creative idea, was selected from among the lot to start the project. "We worked hard to prepare the application and worked with professionals to develop a good design. We were selected by The City of Toronto Council to develop the project as a result of our new idea, the design, and most importantly, out long tract record of success in our community and commitment to helping others. We were fortunate to have engaged a consultant who helped put our ideas together in the required format that would be acceptable to the City and an architect who prepared all the drawings to be presented to the City, Deirdre Gibson and Robert Reimers," Nana added.

The successful completion of this project he said "Will set the stage for many other planned projects. He said also that, "Future community projects that will bear Ghanaian signature will be highly considered by the various governments. The Feds are helping us with GST Rebates; The Province PST rebates, The City with a piece of land." In short and finally, Nana emphasized that all the three governments have chipped in some money to top the loan received from the private institutions for the purpose of this all-important project. Then there was an introduction of their new Chartered Accountant, Mrs. Susan Okonnor, Crown Tax Corporation who was also greeted with great respect by GACMAT on that day.

In conclusion, Nana mentioned Our Federal Member of Parliament Judi Sygro, Our Member of Provincial Parliament Mario Sergio, Our Local Councilor Peter Lipreti, and also Councilor Gorgio Mammoliti as representatives of all three hierarchies
Of Governments who have each and individually contributed immensely and tirelessly towards the upkeep of the building project.

The building is projected to be completed in the next ten months and when it is done and completed as anticipated, it shall be named and called "EMIRY VILLAGE and will have a commercial component with shops along the frontage of Finch Avenue as suggested by Mammoliti in whose ward the project is. Funds generated from running the shops will help provide the much-needed revenue for running the Youth Programs.

In the end, a storm of applause was given in honor of Mr. Rome Muia and the entire Bell View Construction crew who have solemnly pledged among other things to help with some donations in kind.
Approaching the podium in an attitude of reverence was the next speaker Mr. Rockson Owusu-Atwima, CACMAT's president, who begun his speech by thanking Nana Agyapong for his leadership role as Chair of the Ghana Amansie Housing Project Committee. (We
take this opportunity to rectify a slight error in our previous publication where Nana Acheampong was referred to as GACMAT's president. We want to clear the air that Nana is rather the chairman of the building committee and not the association as published. We sincerely apologize for every inconvenience caused).

President Owusu-Atwima's speech was centered on three main subjects namely; The New Immigrants,
The Elderly and The Youth of our community.
He referred to the project as one of a kind under Canadian Immigration Services where Ghanaians have chosen as an ideal habitat to live in a microcosm of a macrocosm. He said it will simply be a building complex where any new immigrant or first visitor to Toronto can go and seek assistance and directives.

Next he touched on the Elderly in the community who are sponsored into the country. He said the facility will provide and advocate a family oriented based services to promote the dignity of the elderly and support the ageing populace among the Ghanaian Community.
The aim is mainly to make them feel at home here in Canada as it is back home. And also to alleviate their sponsors to also feel at ease in going about their daily businesses without much worry about what might happen to the elderly during their absence. Also, while the elderly will have the opportunity to pass on their wisdom to the youths in the courtyard or at the youth center the premises will provide essentially good neighbourhood programmes with the aim of promoting emotional and psychological well being to reach out to all lonely elderly in the community to relieve them of boredom and loneliness by playing some home based games as "Oware" and Draughts.

Finally Mr. Owusu-Atwima accentuated the importance of creating the Youth Resource Center to implement programs that will help our children grow up to become useful citizens. He said, "Our members have always raisedconcerns about youth violence in Toronto and how it impacts on our children. We all cannot deny the fact that our children have picked up the vibe and some have been directly or indirectly involved in illegal youth activities, hammering on the fact that "We are here to help change that! We can no longer turn blind eyes to the problem. Owusu Atwima added. That is why the Youth Resources Centre providing 'a before and after school programs for the youth' becomes essentially beneficial to the youth and for that matter the entire community. Activities will include peer counseling, voluntary tutoring, clubs for youth and other educational sectors to keep them occupied and thus, help them stay away from loitering aimlessly about the streets at all times.

Finally Mr. Owusu-Atwima elaborated on the fact that GACMAT intends to implement child-care programs for all mothers needing the service in like manner as it is done back home where the children will be playing freely in the open. With that he vehemently asked for donations like money, computers, desks and games, towards the creation of this youth centre and as he puts it, “it takes a whole village to raise a child”.
In all the event was very successful and weltended.