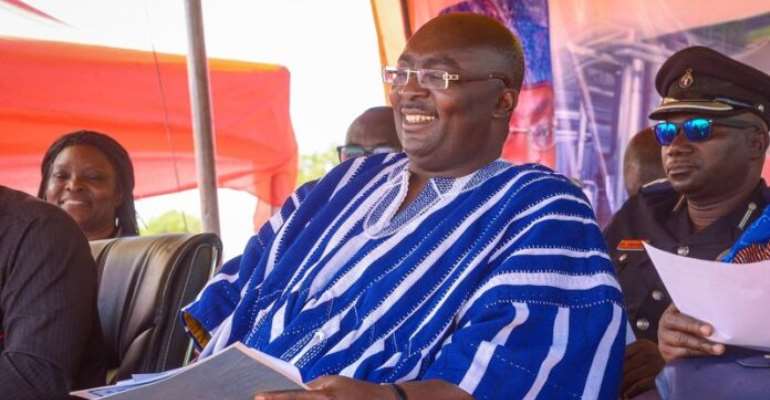 Following the creation of the new Western North Region, the former Western Region House of Chiefs was dissolved on Tuesday September 15, 2020 after it held its final meeting, and a new one, comprising only traditional authorities in the Western Region.

Traditional authorities whose jurisdiction fall within the newly created region will be under the Western North Regional House of Chiefs, which will be inaugurated by President Akufo-Addo later this month.

Addressing the Chiefs after their inauguration, Vice President Bawumia said, despite controversies that the Chieftaincy institution has gone through in some areas, the relevance and contribution of Chieftaincy to the development of the country cannot be underestimated.

“Nananom, the Chieftaincy institution, like various other institutions of state, has lived through controversial periods of our history, playing different roles at different time.” Dr. Bawumia said.

The Vice President noted that some people often raise criticism about the relevance of chieftaincy, but he maintained that the institution is indispensable.

“I do not hesitate to state that Chieftaincy has, and will be an indispensable part of our history and development. It is so widely respected that even when our fellow Ghanaians leave our shores and are free of the influence of chieftaincy, they create chiefs wherever they are,” Dr. Bawumia stated.

Vice President Bawumia stressed the Akufo-Addo’s belief in the Chieftaincy institution as an integral part of the nation’s development process, especially in our democratic dispensation.

He also listed a number of things the Akufo-Addo government has done, since assuming office in 2017, which he said affirms the government’s belief and support of the Chieftaincy institution.

“Government recognizes that, in order to ensure the success of the programme of social and economic transformation that was put before the Ghanaian people, we have to do a lot. It is important that we bring the traditional role of our Chiefs into the modern, constitutional set up, under which we govern our country,” Dr. Bawumia emphasised.

“As a start, we made a pledge, in the NPP’s 2016 Manifesto, to increase the monthly allowances paid to Chiefs, and the quarterly budgetary support to the Traditional Councils and Houses of Chiefs. This we have done by a hundred percent (100%).”

“Government has also assisted the National House of Chiefs with three million, five hundred thousand cedis (GH¢3.5 million) for the completion of its new headquarters office complex in Kumasi.

“Government is also committed to assisting the National House of Chiefs to moving speedily on finishing work on the codification of the traditional norms and rules that have guided our communities throughout the ages.”

“The Chieftaincy Ministry has also instituted a programme to have courses in Chieftaincy development, comprising lectures, seminars and other activities, aimed at building the capacity of Chiefs and all persons with interests in the Chieftaincy institution. I applaud this initiative.”

As the Vice President enumerated a number strides the government has made in the Chieftaincy sector, he also bemoaned the many Chieftaincy disputes in the country, which he said is “unfortunately one of the major setbacks to our nation’s socio-economic development.”

“Such disputes have resulted, sometimes, in full blown conficts, threats to our nation’s peace and stability, destruction of properties, loss of lives, closure of educational and health facilities, and separation of families.”

He added that government is concerned, and in a move to help curb chieftaincy disputes, has decided to take up the cost of extrajudicial committees of the various House of Chiefs to help speed up the adjudication of disputes.

“In helping to reduce these disputes and their harmful effects, government, through the Ministry of

Chieftaincy and Religious Affairs arranged to provide the funds that will increase the number of sittings of Judicial Committees of Regional Houses.”

“This should hasten the adjudication of pending issues, in order to bring closure to outstanding disputes that continue to generate tension.”

“Again, the National House of Chiefs, together with the Chieftaincy Ministry, in order to reduce conflicts and establish areas of customary jurisdiction and allegiance, has delineated traditional areas of paramountcy”

“We need as a matter of urgency, an efficient and well-functioning regime of titling, fixing of boundaries, and ownership tracing,” he said.