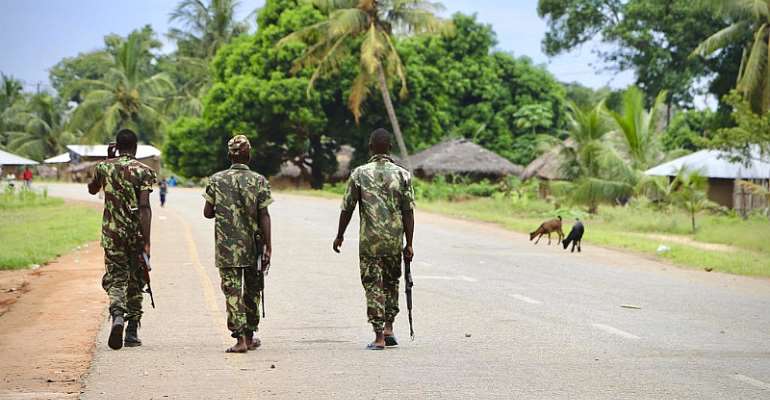 The military in Mozambique hounded, beat, and killed a naked woman, says rights group Amnesty International after verifying a video footage of the attack. The images have been circulating since September 7th and were filmed by one the men.

“This is cruel, chilling. I have never seen anything like that before.”

A short video footage depicting the scene circulated widely on social media on 14 September. But it was shared privately on mobile phones as from 7 September, the day according to Amnesty, it was filmed.

The video shows a naked woman walking down a road in the countryside, taunted by men wearing military fatigues. She is being filmed while the men beat her up with sticks. They then opened fire at her. The woman was killed with several gunshots, the last rounds fired while her body laid inert on the side of the road. The video then zooms on a man making a victory sign.

According to Amnesty, the men in the video are members of the Mozambique Armed Defense Force (FADM).

“Four different gunmen shot her a total of 36 times with a variety of Kalashnikov rifles and a PKM-style machine gun,” Amnesty reported.

“The soldiers were wearing the uniform of the FADM. One soldier has the distinctive yellow-and-black scroll on his left shoulder, as seen in the accompanying image.

“Most of the soldiers are in full uniforms, but the PKM gunner is wearing a red shirt in place of the standard camouflage one.”

Amnesty confirms the men were speaking Portuguese.
Matsinhe told RFI that at the beginning of the video, they can be heard saying, 'This is Al-Shabaab'.

“Towards the end, the man making the V sign can be heard saying 'We've just killed Al-Shabaab'.”

A local military source told Amnesty that the woman had 'cast a spell' on the Mozambican Army and refused to show them the insurgents' hideout.

According to analysis by Amnesty International's Crisis Evidence Lab, the unidentified woman was killed at or near coordinates -11.518419, 40.021284, in the middle of the R698 road, outside the electrical substation on the western side of the town of Awasse in Cabo Delgado.

It was one of the men who filmed the whole scene, Matsinhe says.

“Four men, 36 bullets. This cannot be defended in any way. And the fact that they themselves are filming and appearing to enjoy what's going on is just unacceptable,” he added.

“Not in country like Mozambique which adheres to rule of law, order and believes in human rights.”

Mozambique's army promptly condemned the actions depicted in the video and called for an investigation into the video's authenticity.

"The FDS (Defence and Security Forces) reiterate that they do not agree with any barbaric act that substantiates the violation of human rights," the Ministry of Defence published on 14 September.

The FDS added that it “considers the images shocking, abusive, disgusting, horrifying and, above all, condemnable”.

Matsinhe notes that the ministry is neither denying, nor confirming that its forces were involved in the killing of the woman.

Matsinhe says that the human rights violations and shocking violence that has been taking place in the northern province of Cabo Delgado is not new.

“This video is just another piece of evidence of what is going on there. People on the ground have been sending us numerous complaints of such violations since 2017. It just hasn't been in the spotlight,” he said.

The researcher added that the government has ignored reports on what is unfolding in Cabo Delgado until last week when it denied the exactions were committed by the army.

The ministry of Defence said, on 10 September, that it was the work of militants.

“One of the tactics used by terrorists in their macabre incursions against the population is to pretend to be elements of the FDS (Defence and Security Forces),” said spokesman Colonel Omar Nala Saranga.

The militants in Cabo Delgado calling themselves Al-Shabaab are not linked to the Somali terrorist organisation.

For Matsinhe, they are disenfranchised youth from the poorest province of Mozambique who have embraced radical islam.

The researcher was captured by the militants in December 2018 during fieldwork.

“We first heard about them in October 2017 when they launched a two-day attack, armed with machete and machine guns, on police stations and government buildings,” he said.

Amnesty wrote that the armed group has committed multiple human rights abuses in their conflict against the Mozambican armed forces, including the beheading of civilians. The army responded with similar tactics.

Cabo Delgado, the northern most province of Mozambique, bordering Tanzania, is also locally referred to as “Cabo Esquecido” in Portuguese, the “Forgotten Cape”.

“The province has the poorest health facilities, the poorest schools, high unemployment,” Matsinhe said. “Yet, it is one, if not the richest, in natural resources.”

“And nothing to show but illiteracy, ignorance, misery and poverty.”

The area is rich in liquid natural gas, rubies, graphite and timber, and international companies have injected substantial investment in the region, including France's Total or the United States' Exon Mobil.

Total has invested over 20 billion dollars in offshore and onshore concessions for liquified natural gas projects in Palma district.

“But the local population, its youth especially, have been denied job opportunities which go to southerners, like Maputo,” explains Matsinhe.

“This ongoing conflict in Cabo Delgado is driven by marginalised young people who have no access to the resources of their land.”