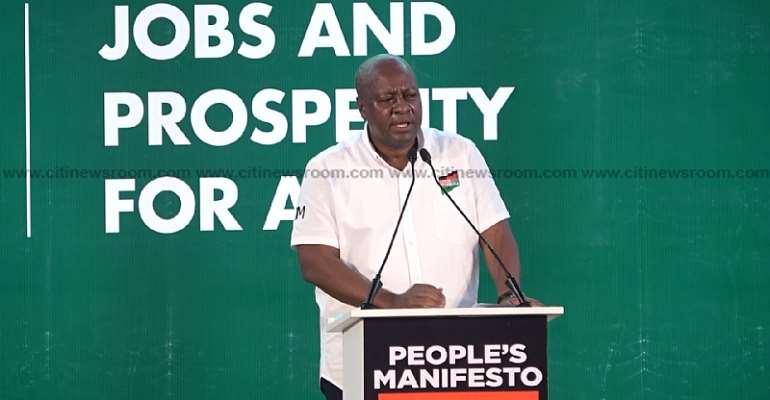 Former President and Flagbearer of the main opposition NDC, John Dramani Mahama, has admonished Ghanaians including chiefs to question the motive behind Akufo-Addo and NPP sod-cutting spree all over the country.

According to him, these sod-cuttings best fit his Sakawa description since it a grand '419 scam' being put up to deceive Ghanaians.

The former president said chiefs should ask questions when the President and the Vice President visit their areas to cut sods for new projects to begin.

Speaking at the NDC's town hall meeting in Kumasi, former President Mahama said the government has been embarking on a number of sod cutting ceremonies in recent times just to deceive the public in order to win their votes.

Mr Mahama wants chiefs to ask during sod-cutting ceremonies if such projects have been captured by government in the 2020 budget.

He has described such sod-cutting ceremonies as “Sakawa” or “419”.

“Lately, the President and his Vice have been going round to cut the sod for various projects without having contractors on site. They only bring the equipment to the site just for the sod-cutting ceremony and return them when the President leaves. So it is just for deception. It is Sakawa. It is 419″.

At the same town hall meeting, John Mahama accused the governing NPP of implementing some of the policies highlighted in his party’s 2020 manifesto.

He cited issues related to the legalisation of okada, cancellation of licensure examinations and inclusion of private Senior High Schools in deprived areas as part of the free SHS policy as examples of policies the Akufo-Addo government is seeking to implement even before the 2020 general elections.

“The NPP seems to be implementing some of the policies captured in our manifesto. Recently, they revealed that consultations have begun to review the law banning the activities of okada riders. Similarly, the Teacher licensure exam has been suspended after we promised to cancel it in our manifesto. In the same vein, owners of private schools are being engaged after we promised to extend the coverage of the free SHS policy to such schools in deprived areas without government’s free SHS. Even though they accused us of not thinking through our promises, the NPP is implementing them,” he added.