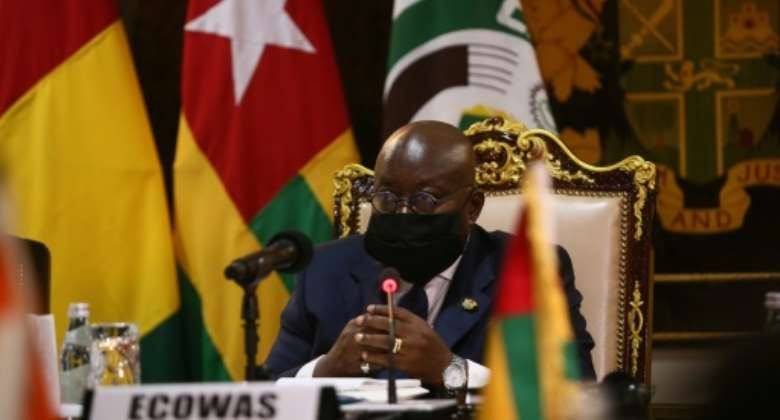 West African leaders said they hope to see a civilian-led transition government installed in Mali "in days" after holding talks on Tuesday with the military junta that seized power in the fragile state last month.

The Economic Community of West African States (ECOWAS) slapped sanctions on Mali after the putsch, including closing borders and a ban on trade and financial flows, and has called for elections within 12 months.

"We need a civilian leadership of the transition," Ghana President Nana Akufo-Addo, who currently chairs ECOWAS, told journalists after hosting the meeting.

"The minute that leadership is put in place through the processes they themselves have agreed upon in Mali, the sanctions that have been placed against Mali will be lifted by ECOWAS."

Akufo-Addo said that a mediator from the bloc would travel to Bamako in a week and that regional leaders wanted the process finished.

"I'm hoping that by the time he gets there these things would have been completed," the Ghanaian leader said.

"We're talking hopefully in days not in weeks."

ECOWAS had given Mali's new military rulers until Tuesday to name a civilian president and prime minister to head a transitional government.

The junta missed that deadline but its leader Colonel Assimi Goita, who was appointed interim head of state, attended the talks in Ghana on his first trip abroad since his seizure of power.

Ivory Coast's President Alassane Ouattara insisted the meeting had made progress by "confirming that the president and the prime minister must be civilians".

"As soon as they are designated, we will lift the sanctions," he told journalists.

The military junta over the weekend backed an arrangement for an 18-month transition government in which the junta would be given the leading role in choosing the interim president.

The head of the Malian military junta, Col. Assimi Goita, centre, arriving in Ghana for the ECOWAS summit. By Nipah Dennis (AFP)

But the document was rejected by Mali's protest movement.

It underscored its objections on Tuesday, while stressing it did not want to "break or get involved in a conflict" with the junta.

The communique said that consultations about the transition -- which culminated in a document published on Saturday after a three-day forum -- were marked by "intimidation (and) anti-democratic and unfair practices" and "the desire to monopolise and confiscate power to the benefit of (the junta)."

"Corrections must be able to be made to the national consultation documents," said Mountaga Tall, a leader of the so-called June 5 Movement, or M5, an alliance of political parties, trade unions, religious figures and NGOs.

Mali's former president, Ibrahim Boubacar Keita, 75, was toppled after months of protests by the M5 demanding his resignation.

He had been facing deep anger over an eight-year-old jihadist insurgency, economic problems and entrenched corruption.

The M5 wants to be given equal status with the junta during the transition.

Other criticism it has made of the junta-backed transition charter concerns the powers that would be given to the vice president, tasked with defence and security -- a job description considered to be tailor-made for Goita.

Mali's neighbours, who are anxious to avoid the fragile Sahel state spiralling into chaos, have not yet reacted to the transition roadmap.

Moussa Traore, who died on Tuesday, ruled Mali for 22 years, taking power and losing it in a coup. By FRANCOIS ROJON (AFP/File)

Last month's coup is Mali's fourth since gaining independence from France in 1960.

A further reminder of its chronic instability came on Tuesday with the death on Tuesday of Moussa Traore, who led the country for 22 years.

In 1968, Moussa Traore, then a lieutenant, was the main instigator of a coup that overthrew Modibo Keita, the country's first post-independence president. He stayed in power until he in turn was ousted in a coup in 1991.