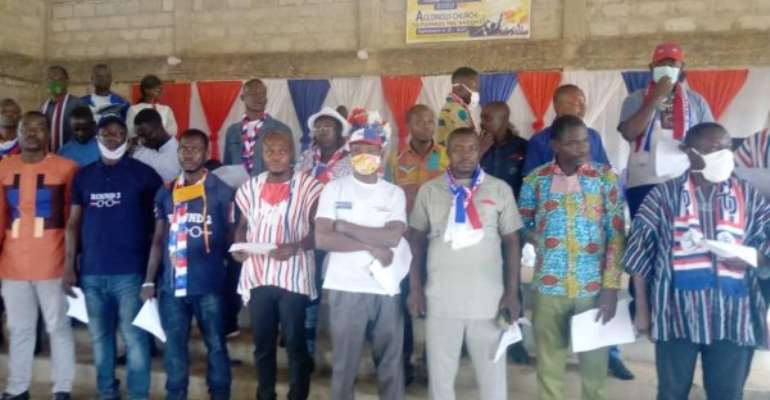 Ahead of the December 7th, 2020, elections, the Amenfi Central Constituency of the Western Region of the NPP has inaugurated a 40- member campaign team.

The campaign strategy is on the theme, 'Agenda 4 more for NANA'.

The Western Regional Organizer of the party, Mr Benedict Addae who inaugurated the team said the team was to account to the people of Amenfi Central what the Nana Akuffo -Addo led government had done for the communities in the constituency in the past four years in government.

He indicated that the 2020 election was a reward Ghanaians were going to give to Nana Akuffo-Addo because of the numerous projects and employment given to the majority of Ghanaians in the public sector which, include teaching service, NABCO, nurses, and Free SHS among others.

The Parliamentary Candidate for the Party who doubles as the District Chief Executive (DCE) and Chairman of the campaign team, Mr Patrick Hockson Amponteng appealed to the members to join hands to work assiduously to inform the constituents what the NPP government has done to deserve another four years in office.

He said the NPP was determined to take over the constituency from the NDC since the seat has always been won by the NDC.

Mr Hockson appealed to the members and supporters of the party in the constituency to continue to have confidence in the NPP government and vote massively for the party in the December polls.