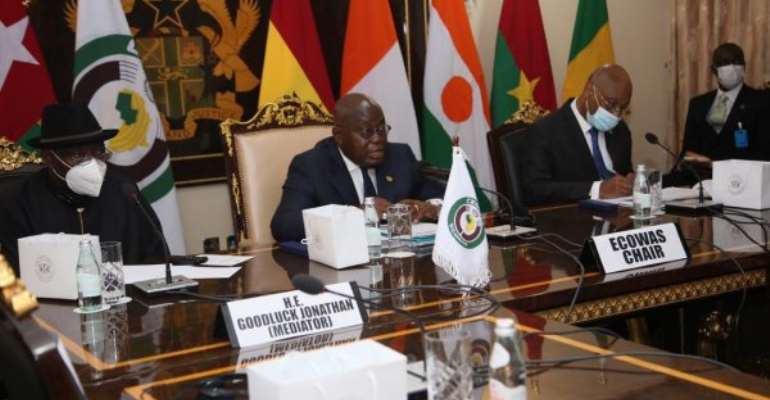 The President of the Republic Nana Addo-Dankwa Akufo-Addo has posited that civilian leadership should be in charge of the transition in Mali, following the recent military Junta.

He said that once the required leadership was put in place through the processes that the Military rulers had agreed on in Mali, the sanctions that had placed on that country would be lifted.

Speaking to journalists after the consultative meeting convened by him to resolve the political crisis in the West African nation, President Akufo-Addo said though an agreement had not reached, the military leadership agreed with the decisions taken at the meeting.

However, the military leadership said they would have to go back to consult with those who were responsible for decisions to get them to buy into it.

"The view point of ECOWAS is that matters that have been put out should be dealt with in terms of days and not weeks so that we begin the process of normalizing the situation in Mali," he said.

In that direction, President Akufo-Addo who was undertaking his first major assignment after being made the regional bloc's chairman, said the mediator in the crisis, Nigeria's former leader Goodluck Jonathan would return to Bamako in a week's time to continue with talks with the military Junta.

"The situation in Mali calls for a quick resolution, we have to have a government in place that can begin the process of normalising things, and more than anything else organising the resistance to the Tuareg menace.

"The issue is now in the hands of the Malians," he stated, hopeful that by the time the mediator returns to Mali, things would have been sorted out so that the sanctions can be lifted.

ECOWAS had imposed sanctions on Mali and asked neighbouring states to close their land and air borders with the country after the military deposed the 75-year-old Malian President Ibrahim Keita on August 15, 2020.

The Bloc also suspended all financial flows between the 14 other member states and Mali, suspended the country from international decision-making bodies, and gave the military junta a deadline of September 15 2020 to appoint a new civilian president and prime minister.

Tuesday's meeting was attended by at least eight Presidents, Mali's political junta and other stakeholders.

They have since left for their respective countries.

Defence Minister requests approval of €111million to purchas...
6 minutes ago