By Farah Abada with Philippe Agret in Paris 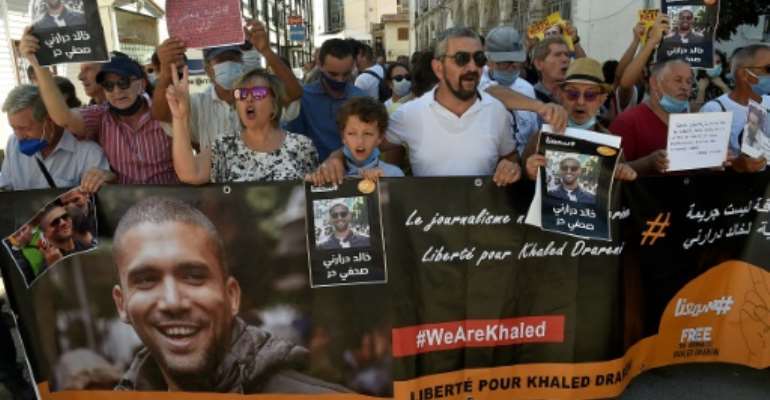 Supporters of Algerian journalist Khaled Drareni, who was sentenced to two years in prison, had been hoping for a lenient judgement, if not acquittal. By RYAD KRAMDI (AFP)

Algerian journalist Khaled Drareni was jailed for two years on appeal Tuesday, amid a crackdown on dissent following a year of anti-government demonstrations.

Drareni, 40, was sentenced in August to three years in jail for his coverage of the mass protest movement that toppled the North African country's longtime president Abdelaziz Bouteflika last year.

Although Drareni's sentence was reduced by a year, his lawyers, colleagues and relatives who had been hoping for a lenient judgement -- if not acquittal -- said they were shocked by the verdict.

The journalist's brother, Chekib Drareni, said in a tweet that he was "disgusted, shocked and disappointed by the court's decision, which once again reinforces injustice in Algeria".

Drareni, editor of the Casbah Tribune news site and correspondent for French-language TV5 Monde as well as press freedom watchdog Reporters Without Borders (RSF), has been in custody since March.

He was found guilty of "inciting an unarmed gathering" and "endangering national unity".

The Minister of Communication Ammar Belhimer also criticised the journalist for working without ever having a professional press card, against a background of allegations of being in the service of "foreign embassies".

The severity of the sentence triggered the indignation and anger of journalists who came to support Drareni in court.

RSF head Christophe Deloire said: "We are outraged by the blind stubbornness of the Algerian judges who have just condemned (Drareni) to two years in prison.

Drareni was tried along with Samir Benlarbi and Slimane Hamitouche, two prominent activists in the Hirak protest movement.

Benlarbi and Hamitouche faced the same charges but were sentenced to four months in prison and released on time served.

The prosecutor had originally called for a four-year prison sentence for all three defendants.

Drareni has denied all charges against him.

"I am a journalist, not a criminal. I only did my job," he said.

The case of Khaled Drareni, photographed here in March, has become a barometer of press freedom in the North African nation. By RYAD KRAMDI (AFP/File)

Drareni, who appeared to have lost significant weight during the trial, has been supported by a global solidarity campaign.

His backers have demanded his "immediate and unconditional" release because of a "worrisome" health condition, according to RSF.

The Hirak movement broke out in February last year and led to the resignation of Bouteflika, whose plans to run for a fifth term had sparked the protests.

Weekly demonstrations continued after Bouteflika's ouster to demand wholesale political change but halted in March due to restrictions to end the novel coronavirus crisis.

Some journalists have been accused by the regime of sowing discord, threatening the national interest and being in the pay of "foreign parties", with several imprisoned and other trials ongoing.

Algerian protesters call for the release from jail of journalist Khaled Drareni. By RYAD KRAMDI (AFP)

Amnesty International denounced the "outrageous" ruling against Drareni, saying it reflected "an alarming pattern of prosecutions targeting journalists and activists" calling for democracy.

According to prisoners' rights group CNLD, some 45 people are currently behind bars on charges related to the Hirak protests.

For Hakim Addad, a Hirak activist, "it is important to continue the movement, including media pressure but also political pressure, so that (the authorities) understand that we won't give up".