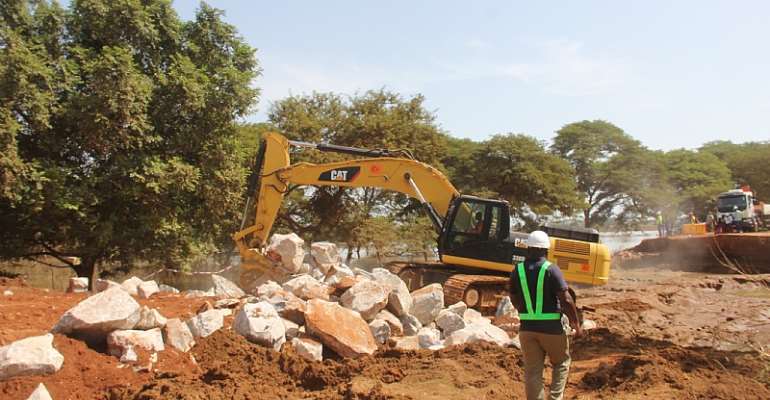 Residents, stranded passengers and truck drivers are expressing gratitude to Quieroz Galvao, a Brazilian contractor working on the 116km stretch of the Bolgatanga-Bawku-Pulmakom highway.

The contractor was hailed for working on portions of the road on the White Volta locally called Kobore which was cut off as a result of spillage of the Bagre and Kompienga dams accompanied by torrential rains including the submerged bridge.

A visit to the site this afternoon at White Volta in the Bawku West District of the Upper East Region observed that the earthwork on the portion of the road, thus clearing of site, graveling and pouring of heavy stones were taking place by the constructor whiles there was still small level water flowing.

Stranded drivers indicate that they were unhappy when Vice President came and could not give them the timeline on when the road would be fixed for the travellers, teachers, nurses, traders to travel across to the nearby communities.

Others have to pay local swimmers to cart their goods and aid them crossover the White Volta at a fee on daily basis.

However, they expressed joy when the contractor visited the site with heavy equipment fixing the road.

Assemblymember for Tanga, Hon. Thomas Ayariga who also a Psychiatric nurse said: “I think the construction and completion of this bridge will help workers to cross to both ends and bring an end to robberies and people losing their lives."

Hon. Thomas Ayariga noted that they are really grateful to the contractor for listening to their cries. "We are being told that the contractor himself is working hard to reduce the suffering of the people and also have access to continue his ongoing construction works on the road".

Mr Emmanuel Laari Abass, District Director of NCCE for Binduri indicated he has not been able to crossover the white volta with a canoe which he described as risky.

"Two days ago a canoe capsized but thank God no casualty was recorded and am was very happy that the contractor was on site to do the road," he stated.

Another traveller, Rev. Dr. Peter Yisazuah, Regional superintendent of Assemblies of God for upper East region B described the situation as an unfortunate. He said his head office is in Bawku and he has since not being to the office since the spillage and the flood but this morning he has realised that the contractor was on site working very hard to create a way for commuters and most stranded passengers to cross to both end. He however was thankful to the authorities for their initiative.

A driver, Gawu Ibrahim, said, they are now happy the contractor was on site making sure the road was fixed. He said the breakdown of the bridge has made passengers to pay higher than before and that, at first, a passenger was charged ghc15.00 from Bawku to Bolga but now GH¢35 and the reason is that, you have to pick a car from Bolga to Kobore at GH¢15, canoe GH¢10 and from Binduri to Bawku GH¢10 making GH¢35

LGBTQ+ Bill: You're shameful backward thinker obsessed with ...
6 minutes ago