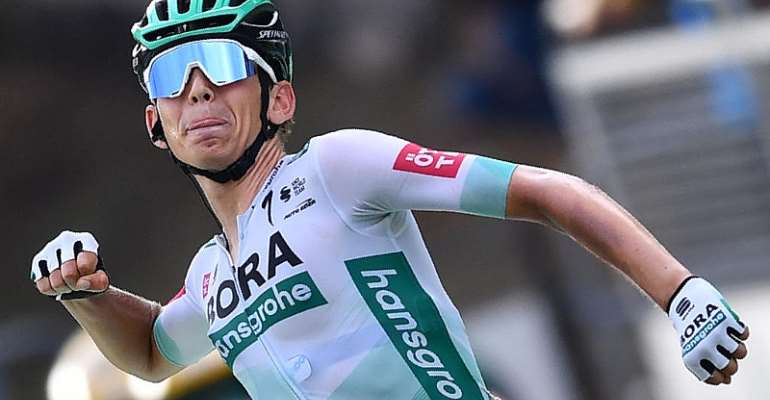 It was the 24-year-old German's first stage victory in cycling's most prestigious race.

"It has been an absolutely awesome day for me out there," said Kämna. "I knew I had to make it to the finish alone in order to win. This victory is a big relief for the team. As for me, I couldn't imagine I was able to pull out a victory like this one."

Team Ineos rider Richard Carapaz was 87 seconds behind Kämna n second and Sebastien Reichenbach of the Groupama-FDJ team was third.

After a fast start, a  group of 15 riders opened a gap of 30 seconds on the peloton.

Advantage
The advantage went past the minute mark and continued to rise. More than 100 kilometres from the line, it was an eight minute margin between the breakaway and the peleton.

Of the frontrunners, Quentin Pacher took up the lead 35km from the finish but the Frenchman was reeled in by four riders including compatriot Julian Alaphilippe, Carapaz as well as Kämna who made his move for glory 20km from the line while climbing the Montee de Saint Nizier du Moucherotte.

"I didn't feel I was in a position to finish with a sprint," Kämna told France 2. "On the climb, I noticed that Carapaz appeared to be tiring and I thought this is the moment to go for it."

Kämna's stage victory propelled him 13 places up to 35th in the overall rankings. Primoz Roglic leads the way. The 30-year-old Slovenian has covered the 2,812.5km in 70 hours, six minutes and 47 seconds.

His countryman, Tadej Pogecar, is 40 seconds behind and Rigoberto Uran from Colombia is 94 seconds off the pacesetter.

The race, which started in Nice on 29 August, culminates along the Champs Elysées in Paris on 20 September.