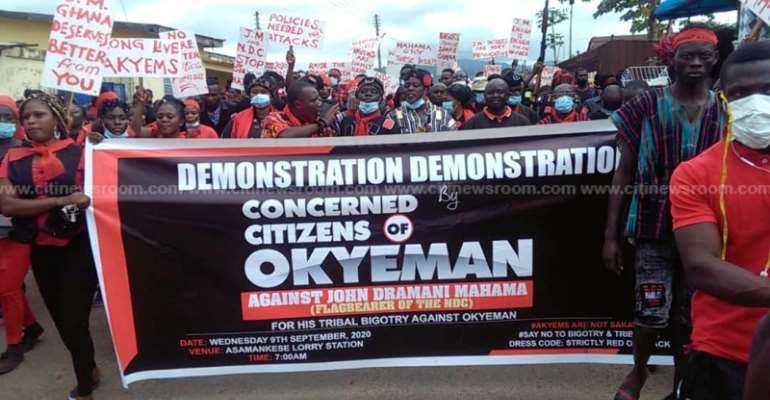 A daring group calling itself Okyeman Youth for Development has given a clear indication to stop John Mahama from campaigning in the Akyem area over failure to apologize for his Akyem-Sakawa outbursts.

This comes on the back of the entrenched position taken by the former President John Dramani Mahama not to render any form of apology for calling key members of the ruling Akufo-Addo and NPP government Akyem-Sakawa Mafia.

John Mahama in an interview on Monday, September 14, 2020, called the bluff of the group which gave him an ultimatum to apologise for supposedly endorsing ethnocentric comments against the people of Akyem.

Meanwhile, the convener for the Okyeman Youth for Development, Nana Yaw Asem Bi Nti in Citi News interview said that, until John Mahama apologises, the Chiefs of Okyeman will not grant him an audience.

“The Akyeman for Development and other Akyem Youth groups did not say we have banned him, what we are saying is that he can pass through Akyem to wherever he wants. However, our people are not going to welcome him or his campaign team until he apologises to us. You need permission from the chief before you enter his land. If he will not apologise, we the people of Akyem are not going to grant him an audience,” he said.

A post by the Bolgatanga Central MP, Isaac Adongo, described elements from the New Patriotic Party as “Akyem Sakawa Boys” in relation to the controversial Agyapa Royalties deal.

The Chiefs and people of Akyem Abuakwa, Akyem Kotoku, and Akyem Bosome on Wednesday, September 9, 2020, issued an ultimatum to the flagbearer of the NDC, John Dramani Mahama, to retract and apologise to Akyems for the “Akyem Sakawa Boys” tag.

A group called the Concerned Citizens of Akyem embarked on a demonstration exercise on September 9, 2020, against what they termed as ethnocentric comments made by the former president.

“We the Concerned Citizens of Akyem call on the elders of the NDC to advise Mr Mahama to apologize unconditionally to the entire Citizens of the three Akyem States within 72 hours and pledge not to make such derogatory statements in the future. Failure to comply will cause all Akyems to prevent Mr Mahama and the NDC from campaigning in any of the three Akyem States,” the group said in a statement.

But John Dramani Mahama, however, said he hasn't endorsed any supposed ethnocentric comments against the people of Akyem.

“I didn't say anybody is Akyem Sakawa. I read a statement by Isaac Adongo and he made a very good argument and my mind was on the body of the arguments he made. The arguments he made were very cogent and that is why I reposted [statement],” he said in an interview on Class FM.