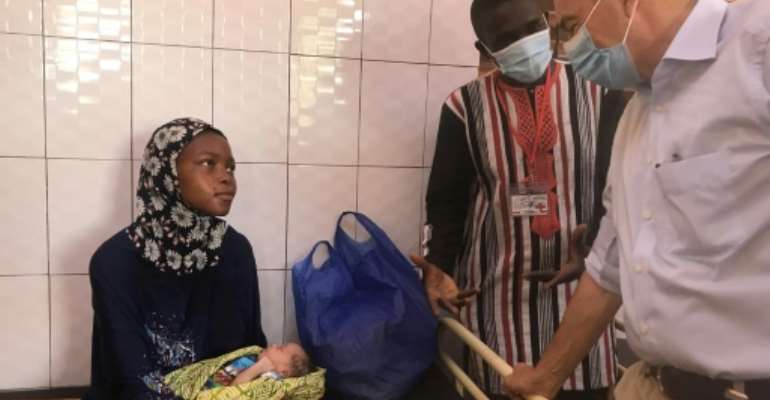 Asseta Rouamba was one of thousands fleeing jihadist violence in Burkina Faso's troubled north when her daughter contracted malaria, putting the pair in an even more desperate situation.

"We are exposed. In addition to the precariousness of our shelter, there are food and health difficulties," the 74-year-old said at the bedside of her daughter inside a white tent at a health centre outside the northeastern city of Kaya.

"This centre has welcomed us with free care, which has been a huge relief."

Kaya, the capital of the Centre-Nord region, has been overwhelmed with a massive influx of people forced to flee their homes by the jihadist insurgency.

More than 1,100 people have lost their lives and over a million have been displaced in the violence since 2015, and the bloodshed is stretching already slim resources in the country's Sahel north.

Asseta Rouamba (left) said the free health care for her daughter had been 'a huge relief'. By - (AFP)

Kaya has been largely spared from the violence, but 472,000 people have taken refuge in the area around the city since January last year.

A third of that number have been taken in at reception sites in Kaya's Sector Six, which is home to the health and social promotion centre where Rouamba's daughter was treated.

Head nurse Issa Sawadogo said the centre receives an average of 160 visits a day, "80 percent of which are internally displaced people (IDPs) living in the sites that host families".

The International Committee of the Red Cross (ICRC) has earmarked 14 million euros ($16.5 million) to fund consultations, vaccinations, maternity care, testing and malnutrition treatment, under a programme begun in April.

"It is clear that there are enormous problems when all of a sudden a community grows by a factor of three or four," he said.

Pointing to the improvements at the centre, he said it was "impressive to see the results here".

The health centre at Kaya has been overwhelmed with a massive influx of people fleeing jihadist violence. By - (AFP)

Head nurse Sawadogo said the centre had struggled since the start of the influx early last year, "but now we are feeling good, more or less".

"With the rehabilitation of the maternity ward, toilets, laundry room and reception room, our health centre has been given a more human face," the nurse added.

Adjaratou Sawadogo, a 43-year-old mother of three who fled violence in the central Barsalogho department, also sang the centre's praises.

"There is no distinction in the treatment between the local population and we displaced people, she said.

Amidou Ouedraogo, a father of three who also fled Barsalogho, said his six-year-old daughter suffered from a fever for two days.

"We came here and she was taken care of -- we received free medicine," he said.

"We salute the efforts the centre is making to help us, because normally my daughter would not benefit from free care," he added -- in Burkina Faso, the age cut-off for free health care is five years.

"But given our situation as 'displaced people', we have no work or income."

Fati Sawadogo, a 34-year-old new mother who gave birth to a healthy baby at the centre, said: "It is really lucky to have this centre next to an IDP site."