Camel racing storms back in Sinai after virus hiatus 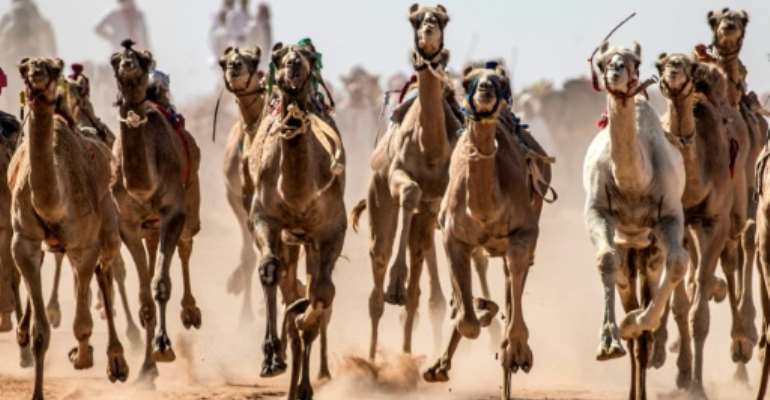 Camels run on a dirt track during a race in Egypt's South Sinai desert after a hiatus of more than six months due to the coronavirus outbreak. By Khaled DESOUKI (AFP)

Spread out at the foot of a vast plateau in the Sinai desert, hundreds of excited Bedouins gathered to race their camels after a six-month break due to coronavirus.

Shrouded in a vast sand cloud kicked up by the hump-backed beasts, more than 500 camels were loudly cheered on by their owners dressed in traditional jalabiyas and headdresses.

Camel racing is a popular traditional sport in many Arab countries, most notably in the Gulf region. And in Egypt, Bedouins of the South Sinai desert have kept up the tradition.

But race events have been suspended since March following the Covid-19 outbreak, and orders only came down at the beginning of the month that they could resume last weekend.

The camels ran around a two-kilometre (1.2-mile) track in the Tih plateau, completing it in a matter of minutes, as they were followed by spectators and owners riding in SUVs to get a close-up glimpse of the action.

The competition "is a training for the international race, which should take place in October in Sharm el-Sheikh," Saleh al-Muzaini, head of the Nuweiba camel club, told AFP.

One group of camels after another, placed in different categories according to age and whether they were male or female, made their debut on the dirt track lined by sand embankments on each side.

On their backs sat mechanical jockeys wearing racing jerseys and brandishing whips, which are lighter than human riders.

In a different race, young boys mount the camels to complete a 10-kilometre course.

Among the audience was 32-year-old Mostapha Abu al-Fadl, a geologist at an oil company in Cairo, who came especially to watch.

"When I heard they were organising the race again, I told my friends how crazy, how wonderful it is... We had to come and see," he said.

To the Bedouins, the race is a way of keeping a traditional heritage alive.

"There was camel racing in the past, but we revived it" in recent years, Sheikh Hassan, of the Alegat tribe, which organises the event, told AFP.

"Camels will not disappear for us. We can use them for centuries. If the camel goes away, the Bedouins will also go away."

Egypt has so far registered over 100,000 coronavirus cases, and more than 5,500 fatalities.

Strict measures, including banning large gatherings, have been imposed in the country since March to prevent contagion.

A Bedouin man runs with his camel as he prepares it to take part in a race in Egypt's South Sinai desert. By Khaled DESOUKI (AFP)

Camel races -- held every two or three months -- often attract large audiences of tourists, visitors and Bedouins to the middle of the Sinai desert.

Sheikh Hassan, however, says the sparsely populated peninsula with its breezy and dry weather had been only mildly affected by the pandemic, and there were no coronavirus measures noticeably in place for the racing.

Suspending the races caused heavy losses for the camel owners, who still had to pay for their animals' training, food and health checkups.

For owner Soleiman Hamad, Saturday's race ended on a high note as his animal came first in its category.

There is no prize money, but the winners carry off a prestigious trophy which also helps boost their animal's value.

Camels with robot jockeys run on a dirt track during a race in Egypt's South Sinai desert. By Khaled DESOUKI (AFP)

For Hamad and others, camel racing represents a source of additional income, provided they also have the means to train, feed and care for the animal.

Each camel costs up to 2,000 Egyptian pounds monthly to feed.

A well-trained camel can sell for up to two million Egyptian pounds, says Sheikh Hassan.

Now they are hoping for precious support with a visit due next month by President Abdel Fattah al-Sisi to the peninsula, which could give a vital boost to their business.