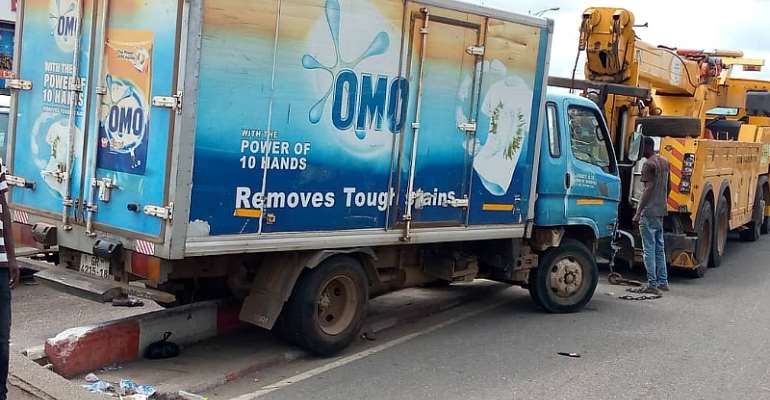 A speeding truck driver has killed a sachet water seller on spot, at the Anloga Junction in Kumasi, the Ashanti region.

The deceased is believed to be in her thirties and has been identified only as Rukaya.

She was crossing the road when the truck run into her.

The driver of the truck reportedly lost control of the vehicle and hit the woman before crashing into a taxi and a tricycle, in traffic.

The taxicab and the tricycle, which were partly damaged in the crash, have been towed, along with the truck, to the Oforikrom Police station.

The driver of the damaged tricycle, Aminu Ibrahim Bamba told Citi News had he not bolted from the scene, he would have been crushed.

“We were waiting in traffic. A Hyundai KIA truck suddenly came from that direction on top speed. It knocked a woman down. I quickly run, leaving my tricycle behind. The truck then run into my tricycle and a taxi. My tricycle is in bad shape now. The woman who was knocked down died on the spot. We called the ambulance immediately.”

The driver is being held at the Oforikrom Police station.