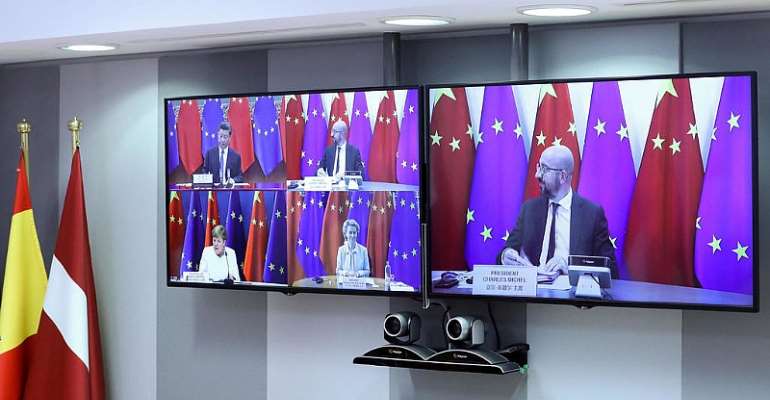 Leaders from the European Union and China have held a video summit focused on trade as both sides sought to revive a long-running investment deal despite concerns over Hong Kong and Beijing's human rights record.

Tensions over trade, investments and minority rights overshadowed the opening of Monday's virtual summit, the second such formal talks between EU and Chinese officials since June.

The two sides went into the talks hoping to make progress on a long-running investment deal, which the EU hopes will allow European companies unfettered access to Chinese markets.

Brussels says progress has been made on issues such as forced technology transfer, but still wants China to open up sectors such as telecoms, IT, health, financial services and manufacturing.

Brussels wants the same level of access to agriculture and food markets that China gave to the United States in their phase 1 trade agreement struck in January.

Earlier, they signed a deal to protect each other's exported food and drink products.

No major breakthrough is expected though on Monday but the EU side hopes to persuade Xi to give fresh political impetus to the talks – and to allow his negotiators more room to compromise.

Since they met in June, there has been some progress on issues such as climate change, with the EU hoping to secure a pledge from Beijing to bring forward the year of peak emissions to 2025 from 2030.

Brussels is also urging the world's top polluter to commit to climate neutrality by 2060, and to stop building fossil fuel plants abroad.

China is planning to set up an emissions-trading system, which is yet to get going. Other developing nations are reluctant to move if China does not.

The two trading partners remain at odds however over Hong Kong. The EU criticised the arrests of dozens of pro-democracy activists this year in the former British colony, including two opposition lawmakers last month.

The EU was due to press Xi on Hong Kong, where Beijing has imposed a controversial new security law, a move denounced by the West as an assault on the city's freedoms.

Europeans have also called China out over its treatment of minority Uighurs.

Several members of the European Parliament wrote a letter ahead of the summit urging EU officials to "meaningfully address" China's human rights violations in the Xinjiang Uyghur Autonomous Region and Hong Kong.

One of the signatories was French MEP Raphael Glucksmann, who urged Angela Merkel and Von der Leyen to adopt a strong European stance in response to the "deportation" of more than one million Muslims to detainment camps in the Xinjiang region.

"Will this crime against humanity be just another footnote?" he wrote on Twitter.

The EU has also faced pressure from the United States to take a tougher stance on China.

Recent visits of US and China officials to Europe show that both care about how the EU positions itself. The bloc does not want to become a battleground between the two powers, needing both and reluctant to alienate either.

Brussels has preferred a middle path, treating Beijing as both a potential partner and a "systemic rival".

The coronavirus pandemic has also created new obstacles, notably what Brussels sees as a China-orchestrated campaign of disinformation about the disease to deflect blame from the health crisis.

Beijing has been accused of trying to influence European officials, and foreign policy chief Borrell has twice denied this year that the External Action Service – a kind of EU foreign office that he leads – has bowed to pressure from Beijing to alter documents. China has denied any wrongdoing.

'Get rich quick' attitude among the youth eroding moral fabr...
48 minutes ago