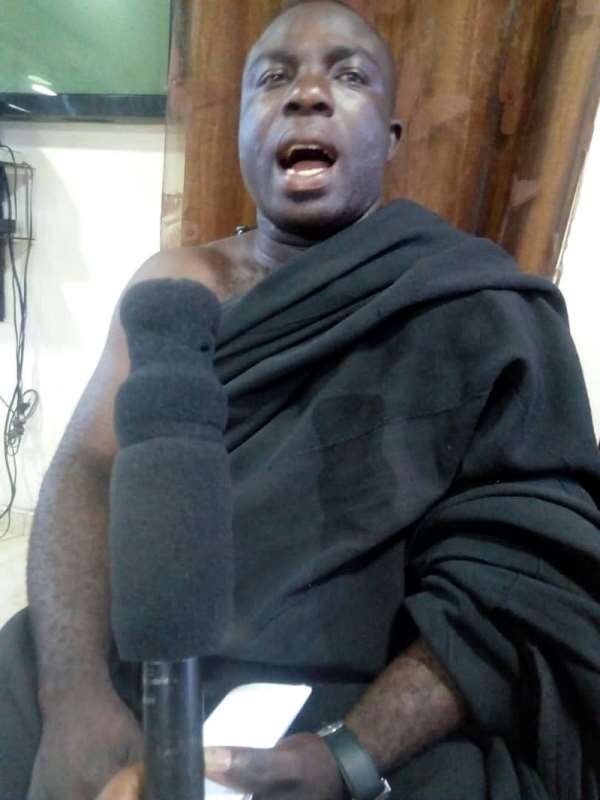 Nana Adu Yaa Adudaa Kani II, Queenmother of Nkoranza in the Bono East Region, has expressed her disappointment in recent pronouncement of Nana Kwame Baffoe at Techiman as the paramount Chief of Nkoranza by his Excellency President Nana Addo Dankwah Akuffo Addo in his recent visit to the region.

Nana Kani II, emphasized that, the citizens of Nkoranza have not yet enstol anybody as the legitimate or substantive paramount Chief for Nkoranza, and for that matter, anybody imposed himself as the paramount chief of the town is never true.

She argued that, it's either the president was misled by his handlers or been misinformed , hence addressing Nana Kwame Baffoe as the paramount chief of Nkoranza at a Durbar in Techiman.

Nana Ata Fosu Owusu Ababio Nkoranza Asamanhene and spokesperson of the Queenmother, at press briefing, explained that, Otumfuo Osei Tutu II, the Asantehene who is the oversight responsibility of Nkoranza has also not enstol anybody as the Chieftancy issue in in the town is pending at Techiman Circuit Court which the Asantehene tasked his lawyer Obiri Boahen written to the court withholding on the matter to give him Otumfuo ample time to meet the two parties to have the matter settled.

According to Nana Owusu Ababio, what happened in Techiman was a surprised to Otumfuo and the Queenmother, as she was patiently waiting for Otumfuo's decision on the matter while the president publicly addressed Nana Kwame Baffoe as paramount chief at Techiman.

He stressed that, in the afternoon hours of the day, when addressing the people of Nkoranza at durba to cut sod for the construction of multi purpose health facility, the president addressed the Ankobiahene who is the Acting President of Nkoranza traditional council, Oheneba Agyei Baffoe and the Queenmother Nana Yaa Adudaa Kani, which means that the president acknowledged that there was a Chieftancy dispute at Nkoranza, but to their surprise on that same fateful day evening the president would address Nana Kwame Baffoe as the Paramount chief of Nkoranza all of the sudden, says they would not blame the president but some elements in the town.

The Queenmother expressed her confidence in Otumfuo to get the matter settle and pleading with her supporters and followers to remain calm, urging them not to resort to anything untoward once Otumfuo Osei Tutu II, the Asantehene has invited her to get the matter resolve amicably to avert any possible violence and misunderstanding to disrupt the peace they are enjoying as one family.

The President was in the Bono East Region on a two day working visit to the people and further canvass for votes ahead of the election 2020.