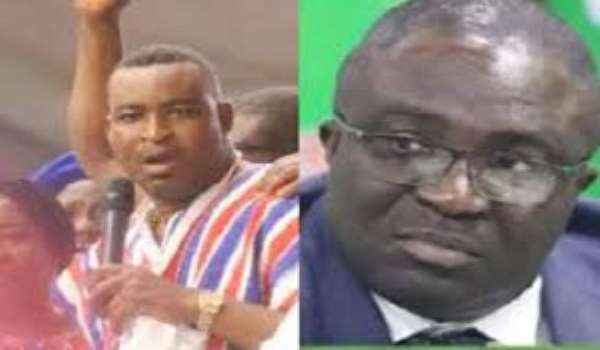 A Kumasi High Court presided over by His Lordship Justice Amedaher Senyo, has given hints of a possible custodial sentence of Ashanti Regional chairman of the NPP, Bernard Antwi Boasiako alias Chairman Wontumi and Member of Parliament for Subin, Eugene Boakye Antwi, upon conviction.

The two together with Patrick Acheampong, Ashanti Regional Director of Research and Election, the Subin constituency chairman Michael Adusei Bonsu and his Secretary Akuamoah Boateng, are facing contempt of the honourable court brought against them by 51 disgruntled delegates of the Subin constituency led by Isaac Nimako, as first applicant.

The 51 applicants are seeking a declaration that the June 20 NPP polls by which the sitting MP claims to have been re-elected by 485 votes, is illegal, unlawful and wrongful and should be declared null and void.

At a sitting of the court last Tuesday, September 8, 2020 amid tight security, the judge said having listened to legal objection of counsel for Plaintiffs and the response by defence counsel, Justice Senyo indicated that the contempt case was quasi-criminal and could lead to imprisonment of the respondents and therefore it would be proper that they (respondents) should be heard by way of the affidavit in opposition filed before the court.

According to him, siding with the counsel for the plaintiff in his objection would mean condemning the third, fifth and sixth respondents before the state and determination of the case.

As a result, the court upheld that the respondents must be heard in full based on the said affidavit in opposition and overruled the legal objection considering the possible consequences of the contempt case at the next adjourned date.

He said parts of the affidavit in opposition by the third, fifth and sixth respondents were erroneous and must be struck out reminding the court of a breach that could not be redeemed since no judge could give immunity to the breach.

Lawyer Kwame Adom Appiah and Dennis Osei Antwi Esq. representing the second, third, fourth, fifth and sixth respondents, disagreed with counsel for applicants and contended that the objection be disregarded in the face of Order 50 stressing that technicalities must not be used to override individual liberty of respondents hence and pleaded that respondents must be heard based on their affidavit in opposition in full.

Ebenezer Donkor stood for the Electoral Commission (EC) as first respondent in the case being represented in court by Lawyer Emanuel Addai.

Meanwhile, Lawyer Kwasi Africa of O & A Legal Consult, has since withdrawn from the case as counsel for Eugene Boakye Antwi, Michael Adusei Bonsu and Akuamoah Boateng on a matter of principle.

I lied that you contracted covid-19, you didn’t also chop co...
56 minutes ago