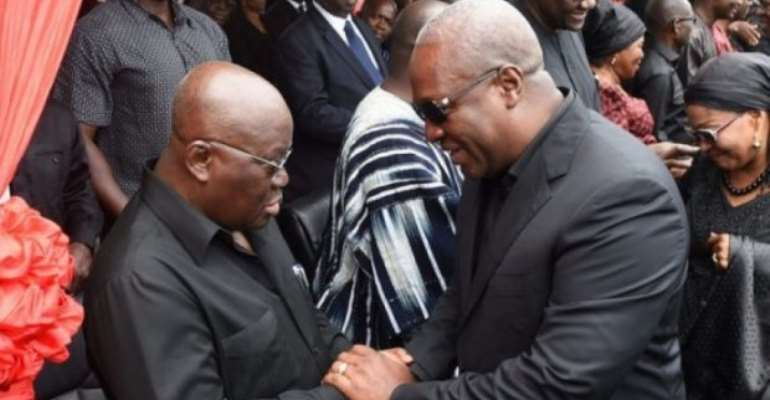 The golden rule says we should treat others the way we want them to treat us, and I want to use a story written somewhere in the 13th century to lay a foundation for my article.

There once was a grandpa who lived with his family. As Grandpa grew older, he began to slobber and spill his food. So the family had him eat alone. When he dropped his bowl and broke it, they scolded him and got him a cheap wooden bowl. Grandpa was so unhappy. Now one day the young grandson was working with wood. "What are you doing?" Mom and Dad asked. "I'm making a wooden bowl," he said, "for when you two get old and must eat alone." Mom and Dad then looked sad and realized how they were mistreating Grandpa. So they decided to keep quiet when he spills his food and to let him eat with the family.

Furthermore, the golden rule goes beyond simply being kind to others. There is the need to speak to others the way we want to be spoken to. Unfortunately, our president, Nana Akufo-Addo, His Excellency, has unconscionably broken the rule. He has on countless occasions, insulted and called his predecessors names, but becomes exceedingly angry when there is a retaliation.

His behaviour reminds me of Peter Tosh's Glass House lyrics which seek to preach the virtues of the golden rule. In fact, I like Rastafarians for being religious and philosophical, but they like too much innuendos. So-so, "akutia". Kikikikikiki, did you hear Peter Tosh? He says that if you live in a glass house you shouldn't throw stones, and that if you can't take blows you better not throw blows. That you should harm no man so no man harms you; and that you should do unto others as you would want them to do to you.

Chai, "akutia" be what? When Nana gets hold of Peter Tosh eh! Check this stanza:

You build your world on lies and illusions

But you never know that

This is the conclusion

No chance no hope for those

Who kept it a goin'

'Cause you never know that

The truth is showing

Abakade, then President Mahama threw some few salvos that you and your clique in government are Akyem Sakawa Boys, and you are throwing tantrums and running to Catholic Bishops for them to intervene. I can't think far! Walahi-talahi, JM toaso; JM biegya!