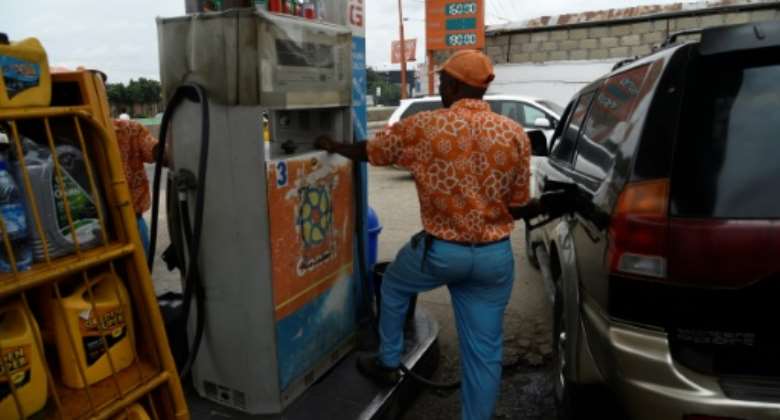 Fuel shock: The price of petrol in Nigeria has risen by around 15 percent after the government curbed subsidies. By PIUS UTOMI EKPEI (AFP)

Tempers have risen in Nigeria along with prices after the oil-rich nation dumped a controversial petrol subsidy system in the face of a coronavirus budget crunch.

While such prices may sound cheap in many countries, the hike is a major blow to cash-strapped consumers who see cut-price petrol as one of the few tangible benefits they get from their dysfunctional leadership.

"We feel it seriously," complained engineer John Kayode as he drew up at a petrol station in central Lagos.

"Fuel is a necessity. And the price hike is affecting every sector."

People in Africa's most populous country, where almost half of the 200 million population live in extreme poverty, have for years relied on the artificially inexpensive fuel.

Despite being the continent's biggest crude producer, Nigeria has almost no working refinery capacity and the authorities have spent tens of billions of dollars to subsidise imports.

Now the government says the global economic slump sparked by the coronavirus pandemic means it simply can't afford it anymore.

Authorities announced an end to the subsidies earlier this year, as falling oil prices robbed Nigeria of a major chunk of its revenues.

Increasing the pain for average Nigerians, the government has also almost doubled the cost of electricity from 33 to more than 60 naira per kilowatt.

Operators of minibuses, the mainstay of public transport in Lagos, say passengers are unwilling to pay extra to compensate for the fuel hike. By PIUS UTOMI EKPEI (AFP)

President Muhammadu Buhari on Monday defended the increases, saying they were "crucial decisions" in view of dwindling revenues.

"There is no provision for fuel subsidy in the revised 2020 budget, simply because we are not able to afford it, if reasonable provisions must be made for health, education and other social services," he said in a statement.

"We now simply have no choice".

The move has sparked plenty of ire as people are already struggling with an economic slump and rising inflation.

Ayuba Wabba, president of Nigeria Labour Congress, described the hikes as "most insensitive and an affront to the Nigerian people who are bearing the heavy burden of the COVID-19 pandemic".

He said the unions would resist "this latest move to impoverish the mass of the working people".

The Socio-Economic Rights and Accountability Project lobby group said "the hike will endanger lives and increase inequality and poverty exacerbated by the Covid-19 pandemic", and vowed to seek legal redress.

On the streets of Lagos, factory worker Liliana Ebosele wanted a price reduction "so the masses can survive."

"I now make less money because passengers are not ready to bear the brunt," he told AFP.

But not everyone has been upset by steps to deregulate and end the costly interventions.

International lenders have long urged Nigeria to ditch them and the authorities came under fresh pressure as they scrambled this year to secure billions in emergency funding to plug the budget.

The fuel hike coincides with a near-doubling in the price of electricity. By PIUS UTOMI EKPEI (AFP)

Economist Michael Famoroti said the corruption-riddled subsidy system that allowed some to profit hugely was simply no longer sustainable.

"For a long time, people have been calling on the government to scrap the subsidies and allow petrol stations to charge the actual price of petrol, Famaroti said.

"When the global price of oil crashed and Covid hit, the Nigerian government was very short on cash. So like a lot of countries, it had to find money to stimulate the economy."

One group that welcomes the new system are those who run petrol stations across the country.

They have repeatedly complained that the government has been passing the financial burden onto them by forcing them to sell for a cut price.

"We have clamoured for the deregulation of the downstream sector for years," Tunji Oyebanji, the chairman of Major Oil Marketers Association of Nigeria, told AFP.

He called for a level-playing field in the industry, stressing that healthy competition will promote efficiency and profitability and eventually lead to fair and stable prices.

"What the president has done is to begin a journey. We are not there yet because there is need to fine-tune the institutions to make the policy work," he said.

Gov’t to set up 5-member committee to lead extensive stakeho...
56 minutes ago