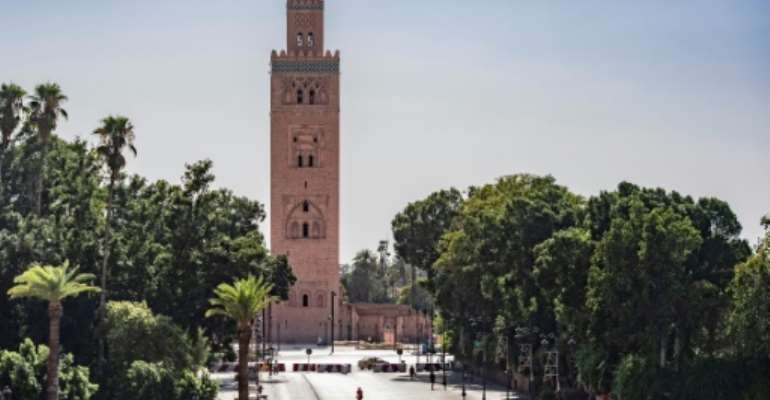 A few people walk by next to the Kutubiyya mosque's minaret tower at the Jemaa el-Fna square in the Moroccan city of Marrakesh on September 8, 2020, currently empty of its usual crowds due to the COVID-19 pandemic. By FADEL SENNA (AFP)

Snake charmers, storytellers and crowds of tourists; the legendary Jamaa El Fna square of Morocco's Marrakesh is almost as famous for the number of visitors as its colourful performers.

But with tough government restrictions imposed to stem the spread of the novel coronavirus, the tourism industry on which Marrakesh depends screeched to a halt.

Now the 11th century UNESCO World Heritage site is almost empty, and the city is facing an unprecedented crisis.

"Before, you had to wait your turn to get a table," said Bachir, a waiter who has worked in the square for two decades, waving at the empty cafe terrace.

His neighbour Mohamed Bassir worries for the future.

"This is the first time I've seen the Jamaa El Fna so empty," the orange juice seller said, sitting behind his stall decorated in plastic fruit.

"It makes me sad," Bassir said, waiting to squeeze fruit for customers who do not come.

Usually teeming with people, the square lies forlorn and empty of the musicians, souvenir sellers and fortune tellers who ordinarily ply their trade.

Morocco declared a state of health emergency in mid-March and shut its borders to stop coronavirus from spreading.

The North African nation of 35 million inhabitants has recorded over 1,500 deaths from coronavirus and more than 86,600 confirmed cases.

In the labyrinth of alleys leading from the Jamaa El Fna, the narrow streets once packed with stalls selling everything from slippers to spices are largely shuttered.

Only a few are open, but the shopkeepers have little hope.

A man walks by mostly-closed stalls at the Jemaa el-Fna square in the Moroccan city of Marrakesh on September 8, 2020. By FADEL SENNA (AFP)

"Most of the traders have closed their shops," said Mohamed Challah, who sells flowing caftan robes.

"The others are opening to kill time because there is nothing to do at home," he said, adding that his store "no longer sells anything".

After the initial pandemic restrictions were eased, traders and tourist operators hoped domestic tourism might mitigate their losses.

But then the surprise announcement of new restrictions, including the closure of Marrakesh and seven other cities, shattered hopes of a revival.

Last year, the city attracted three of the 13 million tourists who came to the country.

For Jalil Habti Idrissi, who runs a 45-year-old travel agency, it will be "very difficult to bounce back".

"We have experienced major crises in the past, but never of this magnitude," Idrissi said, adding his business had "collapsed."

On social media, there are calls to "save" the city, with many using the hashtag "Marrakesh suffocates".

But many are also worried about the Covid-19 crisis itself, posting images of patients suffering from the virus.

They show patients sleeping on the floor in the hospital in Marrakesh.

The city's testing laboratories were overwhelmed.

Marrakesh, along with the economic capital Casablanca, is among the most affected cities.

Like all governments, the authorities have to weigh lockdown measures against the need to keep the economy alive.

The Covid-19 pandemic is expected to push Morocco's economy into its worst recession since 1996. By FADEL SENNA (AFP)

Official figures predict the pandemic could push the country into its worst recession since 1996, with a contraction of more than five percent of its GDP.

In desperation, some took to the streets to protest, calling on the government for help.

"The coronavirus will not have time to kill us, hunger will take care of it before," read one banner held by protesters in Marrakesh on September 11.

Tourist operators cling on to a glimmer of hope, with the government allowing travellers not needing a visa to fly to Morocco -- upon the presentation of a hotel reservation and a negative coronavirus test.

But it is only a "partial opening of borders", said Ibtissam Jamili, who runs a five-star hotel in Marrakesh, mourning what he calls "colossal losses".