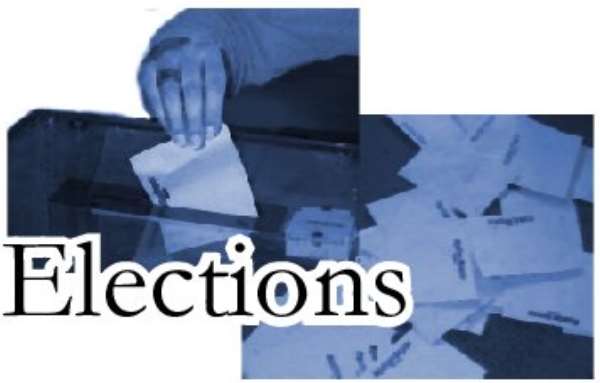 Ghanaians go to the polls today to elect their representatives to 136 out of the 138 district assemblies and unit committees in the country. Elections in two districts, Yendi and Tamale, have been put on hold following a court injunction against the holding of the elections there.

The applicants claimed that the two assemblies were inaugurated two years ago and had not completed their constitutionally stipulated four-year terms.

The elections which were originally slated for September 12, 2006 had to be postponed to September 26, 2006 to enable the Electoral Commission (EC) comply with a court order in respect of an application filed by three individuals calling for the recount of all the ballots cast during the 2004 presidential elections.

The three are Mr Rojo Mettle Nunoo, Mr Kofi Portuphy and Squadron Leader Clend Sowu (rtd). The EC has completed the mounting of platforms for all the candidates contesting the elections to present their manifestos and programmes to the electorate for assessment. It has also trained election officials for the exercise which begins from 7 a.m. to 5 p.m. The election to the assemblies and unit committees are supposed to be non-partisan and it is an offence for any political party or official to attempt to influence the elections in favour of any candidate.

Some of the candidates contesting elections to the district assemblies are standing unopposed but the EC has not been able to provide the exact number.

Many of the unit committees did not get the required number of candidates to contest, which means there will be no contest in those areas. As of Thursday, September 21, 2006 the EC had despatched all logistics to the regions, ready for the polls.
According to the Director of Elections at the EC, Mr Albert Kofi Arhin, everything was set for the elections.

“We are almost ready. All the logistics have been sent to the regions. We are just left with a few things; that is when our officers report any shortage, we top them up”, he said. The training of election officials, which started on September 20, will end today, September 25, 2006. The election director noted that the commission deliberately fixed the training exercise for the last moment because it wanted the lessons learnt to be fresh in the minds of the officials.

The exact number of ballots is not readily known, a situation which the election director attributed to the fact that some positions in the units were not being contested, while some of the candidates for the district assembly elections were standing unopposed. He stressed that in the district assembly election patronage was about 95 per cent and that of the unit committee election about 50 per cent. He denied that some of the ballots for the elections leaked during printing, and assured voters of enough security during polling.

On supervision, Mr Arhin said the Ghana Education Service was solidly behind the commission with regard to the provision of election supervisors. He also said the problems associated with the allowances for election officials were things of the past, and that all allowances in respect of the elections were sent to the regions two weeks ahead of the elections so they are likely to be paid immediately after the exercise.

He said security arrangements had been completed and information already passed on to the security agencies on the various “flash points” for the security personnel to be vigilant to prevent any trouble.

'Funny Ejura committee did a shambolic job, report full of p...
30 minutes ago